I asked the guys over at Dawgs By Nature to give some insight on Tom Heckert, who will replace Keith Kidd as Broncos director of pro personnel. Heckert served as Browns general manager from 2010-2012. The Q&A with DBN contributors Jon Stinchcomb and Mike Krupka is below.

MHR: What is your opinion of Tom Heckert? Browns fans in general?

Jon Stinchcomb: I'm a big fan of Heckert's work in player personnel, but not nearly as big a fan of him as a person. Luckily, the latter didn't seem to hurt the job he was doing at all.

As far as Browns fans in general, I think it's roughly about 60-40 that liked his worked, but among the draftniks, hardcore Browns fans that truly know the sport, it was probably closer to 90 percent.

The fact is he did a great job while he was here. But, he wasn't a world beater. There were some mistakes, a few bad picks, here and there. We here in Cleveland also have had some really bad GMs in our recent history, so Heckert would benefit from those comparisons.

I think the Cleveland media was pretty critical of Heckert because they used the "Pro Bowl" measuring stick, which immediately puts the criticism in perspective. No, there were winning popularity contests, but Heckert was accumulating talent and had the cap space to keep them.

I can't blame him for our coaches' failure to create a winning culture or for their inability to install schemes from modern day football.

Mike Krupka: I personally thought Tom Heckert did a great job building a young core for the Cleveland Browns. Unlike some Browns fans, I can't blame him for our coaches' failure to create a winning culture or for their inability to install schemes from modern day football. I also can't fault him for Mike Holmgren's absolute apathy for his job and for creating a winner here in Cleveland. I would love to know this with certainty, but I believe Heckert's decisions were altered by Mike Holmgren in acquiring Brandon Weeden as well as trading up for Trent Richardson --- there's not much you can do when your boss pulls rank on your decisions.

MHR: What were the reasons for his being let go in Cleveland?

JS: Someone convinced Jimmy Haslam to hire Joe Banner. Heckert was done from that moment. The new management wanted new everything else, as is the way it usually goes in the NFL. There was also a growing disdain for Mike Holmgren in Cleveland (note: not Heckert), but if Holmgren was gone, all of the key figures underneath him were gone as well. One Cleveland media member wrote and talked about Banner's relationship to Mike Lombardi from the very beginning and the rumblings he'd been hearing already about Lombardi reprising his role as Browns GM. It turned out to be true. Heckert never stood a chance.

He was a victim of a regime change; he wasn't fired due to poor performance.

MK: If you've ever seen the movie Office Space, you're familiar with "The Bobs". In this example, "The Bobs" represent the new owner and leadership that came into Cleveland with a plan to effectively reboot the team and ensure "their people" were in place from day one. While I don't have a link to substantiate this claim at the moment, Tom Heckert and the new Browns' President Joe Banner had a falling out while in Philadelphia together which ultimately sealed his fate here in Cleveland. 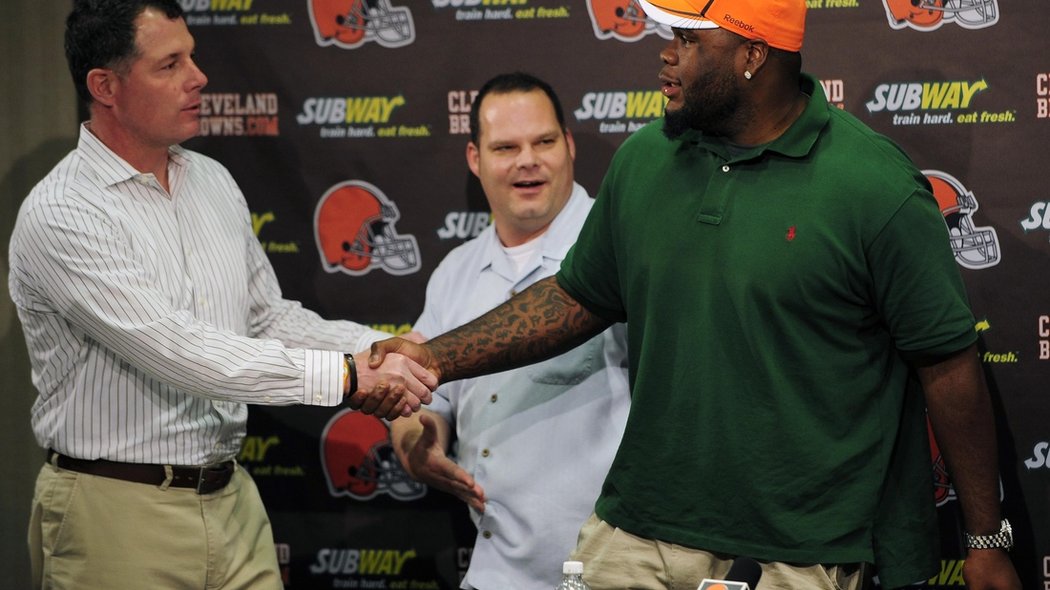 If you look at his decisions and philosophy vs. the current regime's, he would have been criticized for his rationale in the first round behind the Julio Jones trade; trading up for Trent Richardson; and drafting the oldest QB and rookie in NFL history in Brandon Weeden.

MHR: What did the Broncos get in this hire?

JS: If you really want to get excited about what Tom Heckert can bring to the Denver Broncos, check out his track record dating as far back as what he did with the Philadelphia Eagles. The Browns, of course, were a different case. It was a rebuilding project and it appeared that he was treating it as such. Heckert wasn't breaking the bank for flash-in-the-pan free agents, honestly preferring to build through the draft and extend the talent already on the roster.

His first two drafts here were great, despite the Colt McCoy and Owen Marecic flops. Joe Haden, TJ Ward, Phil Taylor, and Jabaal Sheard, are the highlights, but there were a few later round starters too.

His last draft (2012) was the most questionable one. The vast majority of us at Dawgs By Nature have a different philosophy regarding drafting a running back in the early first round, let alone trading up to No. 3 overall to do it. That was followed up with Brandon Weeden, which for what it's worth Holmgren said he pulled rank on after the draft.

Expect talented NFL starting-caliber players in the second round. If Montario Hardesty had been healthy and if Greg Little had a quarterback, those guys would be right there along Ward, Sheard and Mitchell Schwartz.

Also, expect a cap wiz. Throughout Heckert's entire tenure here, the Browns were great cap condition and never risked losing a great player they didn't have to.

I'm sure he isn't going to treat what is a playoff caliber roster in Denver the same way he did what was a rebuilding project in Cleveland, but the man knows what he's doing and he does it well.

Heckert was easily the best GM we've had since the return in 1999.

MK: When it came to evaluating and acquiring talent, I thought Tom Heckert got it right more often than he got it wrong. He was responsible for turning over oldest NFL rosters which is now one of the youngest in the NFL. He was responsible for drafting young budding players ( all with less than 4 years experience ) such as TJ Ward, Joe Haden, Greg Little, Mitchell Schwartz, Phil Taylor, Trent Richardson, Josh Gordon, John Hughes, Jordan Cameron, Billy Winn, James Michael Johnson, Shaun Lauvao, Jason Pinkston, Travis Benjamin and perhaps Brandon Weeden. He was also responsible for signing productive UDFA's players like LJ Fort, Craig Robertson, Johnson Bademosi and Tashon Gipson, all who saw considerable action last year on defense --- not just special teams --- providing our organization with tremendous value and depth. Heckert was easily the best GM we've had since the return in 1999.

Big thanks again to Jon and Mike at Dawgs By Nature for taking the time.