Share All sharing options for: Willis McGahee has eye on Broncos' starting role

Despite missing OTAs for what he called "family reasons", running back Willis McGahee hasn't lost sight of his prize: the Denver Broncos' starting running back role.

McGahee, 31, told reporters at minicamp Tuesday that he still expects to be the starter when Denver's opening game against the Baltimore Ravens comes around. "I plan on starting Sept 5th," McGahee said.

The veteran appears to have an uphill battle. McGahee reported for minicamp yesterday, but he said he only participated in "a couple" of snaps, leaving the bulk of the carries to second year running back Ronnie Hillman and 2013 second round draft pick Montee Ball. That's an extension of OTAs, where McGahee's absence allowed Hillman and Ball to each see more reps with the starting offense. 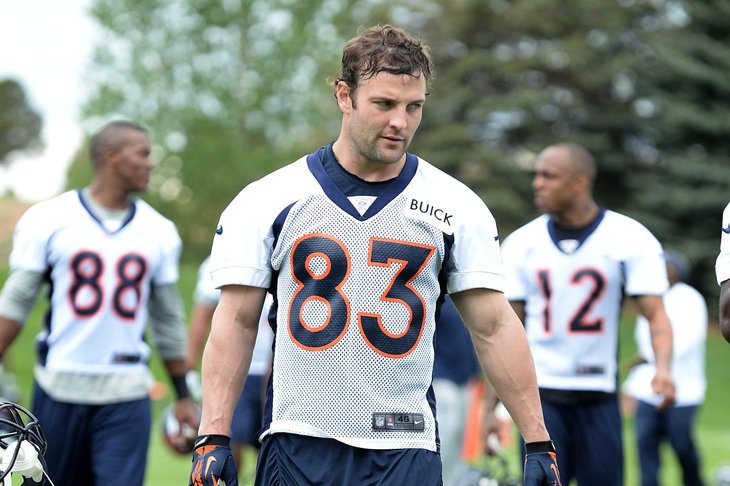 We break down the running back situation following OTAs, saying McGahee remains the most likely to be Denver's opening day starter. Agree or disagree?

The Broncos are invested in Hillman's and Ball's success, but McGahee has two things going for him: experience and health. There's no denying that he is the most productive and proven back at the NFL level when healthy, and healthy is exactly how he appears to be. The veteran reported to minicamp in top shape, reportedly even losing weight since January.

"(I'm doing) a whole lot better," McGahee said. "I probably would have still had a limp in January, but I’d have been able to play. It’s all about your heart and your mind. If I tell myself I can do it, I’m going to go out and do it."

Right now, McGahee is telling himself he can win back the Broncos' starting role. Until then, he's keeping his mental attitude in the same top shape as his physicalilty.

"It feels good being around my teammates," said McGahee. "Everybody is happy to see me and I'm happy to see them. I can't complain."