Hello folks, here's the scuttlebutt out of Dove Valley on the eve of the last minicamp practice!

Shaun Phillips returned to practice today after being excused yesterday by the team for "personal reasons." And apparently, the Broncos new pass rushing addition loves Oreo cookies along with some of the other Broncos. Who doesn't? FWIW, just don't get caught eating them at the poker table like Teddy KGB. One final bit of non-related football news, Von Miller has some new ink to show off: 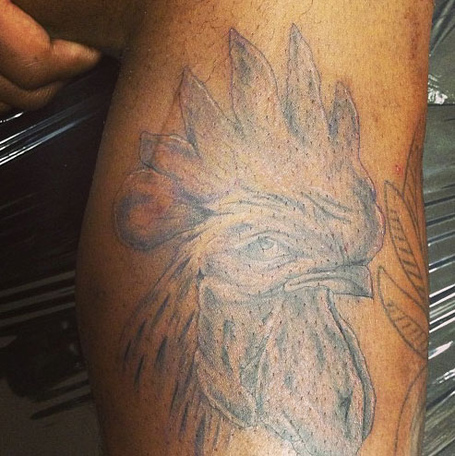 Let's just say when it comes to taking down the QB, Von Miller is the cock of the walk!

There's been lots of talk and speculation about the implications of McGahee missing voluntary workouts with the team. McGahee found himself back at practice this week and with a lighter work load yesterday, some opined that he was in the dog house. The only opinion that matters right now was summed up quite nicely by OC Adam Gase:

"Ignore him? We're not going to ignore him. I mean we're trying to get him in here, get him familiar again....We've had some changes in some of the things we've done on offense and he's just trying to get used to what we're doing."

Montee Ball and Ronnie Hillman may have the inside track on the top RB spots on the depth chart, but until they prove they can handle their respective roles don't expect McGahee to go anywhere. Though I believe Moreno and McGahee are ultimately fighting for one spot--something I've said since before the draft, in an ideal world both would stick. Who knows, maybe they will. I would much rather see a 4-deep RB rotation of M. Ball, Hillman, Knowshon, and McGahee with Hester sticking as a 5th option slash FB slash ST contributor than say a rotation of M. Ball, Hillman, Knowshon, and "Blue" Ball.

Andrew Mason sees Chris Harris making quicker and more decisive reads in coverage which is a scary thought considering how good he was last year. Wes Welker is the biggest reason why.

Harris looks quicker at reacting when the ball is thrown in his direction than he did last year; that's what working against Welker every day will do for you.

The two did battle today. Welker's best play came on a beautiful long TD pass up the seam as he beat both Chris Harris and David Bruton. Harris' best play came when he picked off a Manning target to Welker.

Mason points out that while Welker is the short/intermediate middle of the field receiver, expect to see him get some long receptions down the seam especially with DT and Decker pulling coverage on the outside. This is going to be a freakish passing attack folks!

Speaking of spreading the ball around, Brock is showing just that ability. A favorite target of his is fellow ASU Alum Gerrell Robinson.

Another interesting day in safety land. Bruton and jammer out with the ones. Hmmmmmm

This is only OTA's blah blah, Carter and Adams are hurt blah blah. Look, I understand those things but the Broncos throwing out different combos lays the groundwork for one of these guys to step into one of those roles. Given the shaky play at times last year for the Safety position, the Broncos would be negligent to stand pat. You know I think Mike Adams is atrocious in coverage, you also know Rahim has had his issues---why not have an open competition from the beginning and get the best two guys out there? This will be something to keep an eye on come TC.

Fox has made it a priority to bring in the Broncos former players to speak to the team on a variety of occasions after several former Broncos said they often felt unwelcome during Josh McDaniels' tenure as head coach.

McDaniels may be an SOB, but I remember him bringing guys like Elway and Rod Smith in to work with the team...

Regardless, it is good to see some of the all time Broncos greats still involved with the team and still valued by the organization.

Von Miller had this to say about Gradishar's words:

"You've only got a short window to come out here and play football, to be a part of something that's way bigger than you. The Broncos has been going on before me, [will go on] after me. The NFL is going to go on; it's going to be one of the strongest businesses in the world. To take advantage of the opportunity, the short window that you have, it's definitely important. You don't want to be forgotten after you've played. You want to take advantage of your time now and be remembered."