An MHR investigation into a social media mystery.

I really don't understand how this works. During practice, aren't Denver Broncos players a little busy, you know, practicing? Too busy to be taking pictures of themselves?

I mean, clearly they're multi-talented. Here's rookie defensive tackle Sylvester Williams carrying the rock like a certain running back who just departed. 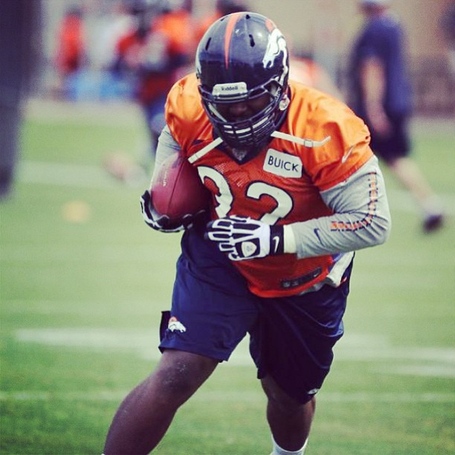 But they can't be that talented. So someone is taking pictures of these players, and sending the pictures to their respective phones, so they can put it on their social media networks themselves.

How did that awkward conversation go about? It's not like the players' friends can watch minicamp and send these to each individual.

However it goes about, clearly it's working. Broncos players are tweeting and instagramming in droves, and they have the follower numbers to back them up. Here's a rundown of social photos from minicamp:

Ronnie Hillman leaps to grab a Peyton Manning toss in the end zone.

Omar Bolden is ready for action.

Steven Johnson hauled in a pick-six.

I figured it had to be either an awesome, player-friendly media figure (think twitpic-happy Cecil Lammey) or the Broncos themselves coordinating these players' Instagrams. After a quick perusal of the official sites' Day 3 photo gallery, indeed, I found the same photos there.

Not a bad setup. I'm all about the Broncos leveraging any way for players to engage directly with fans. And at least the players get to caption the pics however they like, shedding some light into their respective personalities.