Share All sharing options for: A Few Good Questions with... Von Miller

We spoke one-on-one with Von Miller at Gatorade's ninth annual Beat the Heat event this Saturday. Here's the full transcript from that exchange.

MHR: Thanks for the time Von, congratulations on finishing minicamp! How did it go?

Von Miller: It was pretty good. Seeing the group of guys, just gelling with everybody, Getting plays down. Getting in sync with Coach Del Rio and just sharpening our knife a little bit. We worked on things we did well and things we didn't do so well. It was great.

As you enter the break, some guys take these six weeks before training camp to get away, but I understand you'll be getting back to work with strength and conditioning coach Luke Richesson in Denver at the end of the month. What led to that decision?

In years past I always go somewhere else and work out. Coach Richesson was just like, 'Just work out here in Denver with me, and right before the season just get it going. The key is just never get out of shape.' So now I'm going to take a short break, keep my condition up, keep my hydration up. Keep stepping on the gas now nutritionally and physically and get it going way before the season starts.

That's excellent. Do you know of any other teammates who will be participating in those workouts with you?

I'm sure a couple of guys. It's the break, so guys' schedules are a lot different. You never know who's going to be here. But I'm going to be there. I'm going to be able to work with Coach Luke (Richesson) every day. I'm really good to go in every day.

The Broncos enter 2013 with high expectations. Do you thrive on that or do you try to close that off, not think about it?

"I just want to improve as a defense.... I want to be technically sound on every single play."

What are your personal expectations or goals for yourself?

I just want to improve as a defense. I want to cut down on some of the mental errors, working a little more on technique. I want to be technically sound on every single play. I want to be able to respond and react in tight situations. Just like what we've been doing but just working on it a little bit more.

Peyton Manning and the Broncos offense are looking to up their tempo this year. Have you felt that in offseason workouts as a defense?

What about going against that up-tempo offense will help you and the defense this year?

I don't know man. You know, it's early. It's early, we're still in the hot summer (June and July) months. I'm here with Gatorade Beat the Heat program which educates athletes about the importance of hydration in the hot summer months. I'm really here to talk to those guys about staying hydrated and letting them know that the hard climate, the hot weather is hard on the body.

You guys had a hot Tuesday over there last week.

Yeah it was pretty hot. You know, with the fires and stuff, it was super hot last week.

What has team nutritionist Brian Snyder said, both to you players and the group at Beat the Heat?

Von Miller is beating complacency - and the heat - this summer 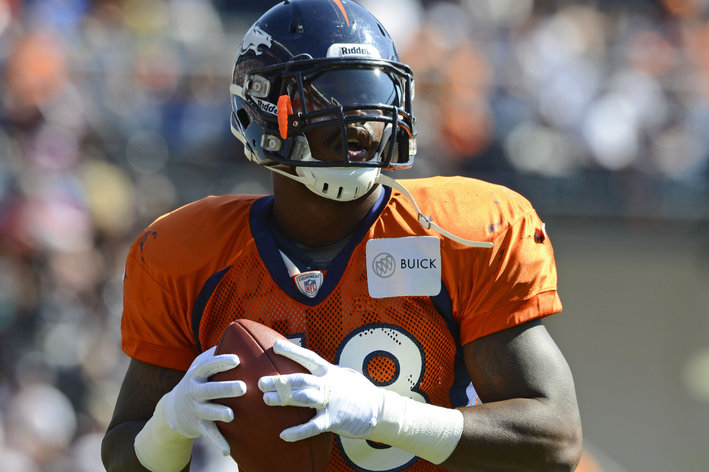 Stay hydrated, make it become a routine. I think the Gatorade Beat the Heat program allows you to do that. You got products that you can take early in the morning to start off. You have products you can use before, during, and after workouts. It gives you a chance to stay on top of your electrolytes and your sodium intake.

You were the first defensive player drafted in 2011. There are a number of star players from that draft, and a number of elite pass rushers. J.J .Watt, Aldon Smith. Are you competing with them to be the best in 2013?

Have the coaches asked you to improve any aspect of your game in particular?

I can always improve on coverage and run support. I think you can always be better at recognizing formations and you can always get more experience just by playing. You can always be better nutritionally and stuff like that, but you can stay on top of your hydration as well. We're just supposed to be taking it one day at a time and taking advantage of all of your opportunities. I think if I continue to create some of these great things together that I'll be all right.

Elvis Dumervil was Denver's big free agent departure this year, your partner in crime. How do you see the Broncos filling that gap, between coaches and players?

I think between guys like Derek Wolfe, and Robert Ayers, and Sylvester Williams, I think if we all up our play 5% we'll be all right. If we can get everybody up front - not just one guy, not two guys, three guys, but everybody - rushing the passer, everybody on point, we'll be pretty good.

Everybody always wants that leadership, everybody wants to deal with that leadership and show guys. But I've always been a locker room guy talking to guys about doing stuff. You know, I'm all about wins, and I think we got great leadership now. I think if we keep taking care of our guys in the locker room we'll be all right.

Have any rookies impressed you or stood out yet?

Oh yeah, Montee Ball looks good. Montee Ball really stood out. Sylvester Williams stood out as well. I think all of our picks really addressed all the issues we have. I think with the competition they bring we can definitely perform at a high level.

Montee Ball said he's more elusive than some people might think. Do you agree? Is he shifty, tough to bring down?

Do you think he and Ronnie Hillman, now that Hillman has upped his weight, can pack a one-two punch?

Thanks Von! Any last words for the fans at MileHighReport.com?

I think we are addressing a lot of issues and taking it one play at a time. When the season starts we'll be ready to go.

One more big thanks to Von Miller for taking the time to answer our questions, and a big thanks to Gatorade for making it happen!