Two of the greatest Broncos of all time, WR Rod Smith and WR/KR/PR Rick Upchurch have worn #80 proudly during their respective illustrious careers.

Perhaps no other Bronco in franchise history epitomizes the winning spirit as well as Rod Smith. You see, Rod Smith wasn't a high round draft pick like Demaryius Thomas. He wasn't a prized free agent like Wes Welker. He was an UDFA rookie that forged his role and became one of the elite receiving threats in the game during his tenure. In this way, Rod Smith blazed the trail for future UDFA rookie phenomenons like Chris Harris and Wesley Woodyard. 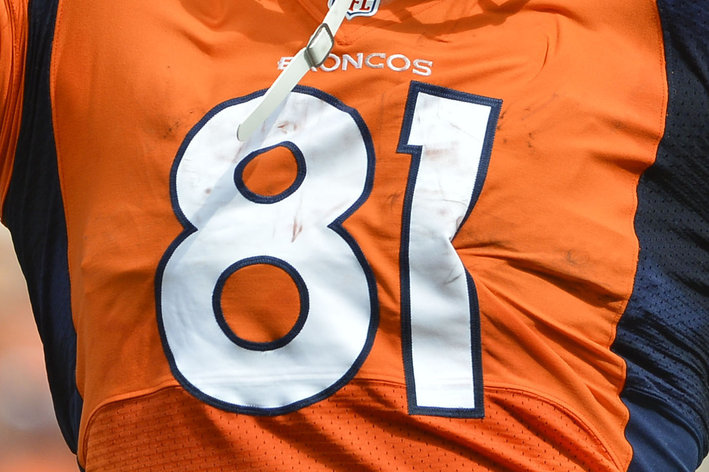 An ode to the coaching tenure of Dan Reeves

It almost didn't happen that way, like many UDFA rookies he faced many obstacles, one of which included being cut by his original team. Rod Smith began his pro football career as a New England Patriot. When he was released early in 1994, the Broncos plucked him from the waiver wires.

For many players, there comes a moment in their career that either defines it or sets the trajectory towards destiny. On September 17th, 1995, against the Washington Redskins, Rod Smith had his moment. In what was his first career reception, Smith hauled in a last second Hail Mary from John Elway for a TD to win the game. Imagine that--your first catch as an NFL receiver happens to be a game winner from a future HOFer!

Well that was only the beginning of what became a glorious Broncos career.

In his career Rod Smith added 348 yards on 44 carries as well as 647 yards and a TD as a Punt Return. He is still the Denver Broncos all time leader in receptions, receiving yards, and TD's.

Nowadays, true #1's are divas. Me first, team second. Rod Smith never talked, never complained, never put himself above the team. In his twilight years, I remember him as the leader of the team calling out the guys who were selfish and unprofessional as young talent stumbled to mediocre performance after mediocre performance. Rod Smith is a dying breed.

- Most catches, yards, and TD receptions amongst UDFA in NFL History

Rick Upchurch was another legendary Broncos WR who is the greatest kick and punt returner in Broncos History. He was a 4th round draft pick of the Denver Broncos in 1975. Rick was used in a variety of different ways in the Broncos offense as a WR and RB.

Kaptain Kirk wrote a nice article about him on BroncoPlanet, here is an excerpt:

In 1976 (his 2nd year), Rick set an NFL record by returning four punts for Touchdowns and made the Pro Bowl. In 1977, he led the league in Punt Return yardage with 653 and helped the Broncos to their first ever Super Bowl appearance.

He led the NFL in Punt Return average twice (1978 and 1982), and finished his career with 49 carries for 349 rushing yards, 267 receptions for 4,369 yards, 248 punt returns for 3,008 yards, and 95 Kickoff Returns for 2,355 yards. Overall, Upchurch gained 10,081 total yards and scored 35 Touchdowns: 8 on Punt Returns, 24 receiving and 3 rushing. At the time of his retirement, those 8 Punt Return Touchdowns tied the NFL record shared by Jack Christiansen. Upchurch is one of five players to record a career average of over 12 yards per Punt Return.

With a guy like Rick Upchurch, many of his probably missed out on watching him play. For those of you that were lucky enough to get to see him play, fantastic! Here are a few videos that show his ability:

Now this one is a full featured NFLN program "Top 10 Return Aces." There is a fantastic 4-minute feature on Rick Upchurch at exactly 17:40. And uh, Gale Sayers, that's some stinging critique from a guy that lucked into the HOF;)

Rick Upchurch dated and was engaged to future Secretary of State Condoleezza Rice in the 1970's.