After posting a 12 win season in 1977 and a 10 win season in 1978, the Broncos posted a 10 win game in 1979 good enough for their 3rd straight playoff appearance. They were coached by Red Miller, a man who began his career as an assistant for Lou Saban (future Broncos head coach) in Boston with the Patriots in 1960. After serving as an offensive line coach many places throughout the 60's and 70's, Miller got his one and only NFL head coaching gig with the Broncos. 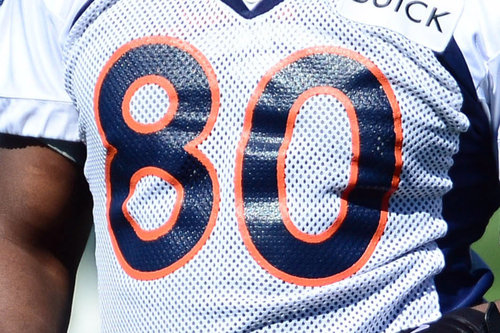 Denver started the season off with a bang shutting out the Cincinnati Bengals at home 10-0. After building a 6-3 record through seven games which highlighted a stellar 4-1 record against AFC west foes, the Broncos experienced a four game winning streak that gave way to a 1-3 record in the final four games including losses in the final two. Most disappointing about the finish was the fact that Denver's three losses came at the hand of AFC West opponents.

The Broncos were fantastic in the cozy confines of Mile High Stadium with a 6-2 record. They were a top 10 defense in yards and a top 5 defense in points allowed, but their offense struggled putting up 18 points per game good enough for 20th in the league. One of the biggest issues why the offense struggled was due to turnovers. Craig Morton, Norris Weese, and Craig Penrose combined to throw for 23 INT's compared to just 18 TD's. Despite forcing over 40 turnovers--19 INT's (led by CB Steve Foley's 6) Denver still finished with a -3 turnover differential.

With a wild card date with the Houston Oilers, Denver's offense never quite found its mojo. After a 1st quarter TD pass from Morton to Dave Preston, the Houston defense coached by Bum Phillips shutout Denver the rest of the way, hassling Craig Morton all day on route to a six sack performance. Though the Broncos forced more turnovers than they coughed up that game, they failed to capitalize on the opportunities. Houston won 13-7.

Red Miller would finish out his NFL coaching career the following season with an 8-8 record. New Broncos owner Edgar Kaiser fired the man after he has posted a 42-20 record in four seasons. This included three playoff appearances in four seasons a Super Bowl berth in 1977. Some guys just seem to get the short end of the stick.