For 15 consecutive years, the Denver Broncos' left tackle position has been represented - and represented well - by the Number 78.

For 15 consecutive years, Denver Broncos quarterbacks have been protected by the Number 78.

Starting in 1998, when Matt Lepsis took over for the retiring Gary Zimmerman (and still helped the Broncos reach Super Bowl glory), and continuing to the present day, there has been a #78 jersey on Denver's blind side. When Lepsis retired in 2007, the Broncos drafted Ryan Clady with their top overall pick; Clady took over Lepsis's roster spot (and jersey number), and the Broncos didn't miss a beat.

Clady is a three-time Pro Bowler and two-time first-team All Pro, already making him the most decorated tackle in franchise history. Clady is only 26 years old. 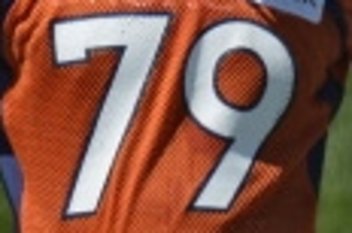 Of course, Ryan Clady is only set to remain with the Broncos for another year as it stands now. Clady is Denver's franchise player and so has a one-year deal available to him that he has yet to sign. The Broncos have until July 15th to sign Clady to a long-term deal.

Here's hoping Clady, and the #78, continue to represent the Broncos for years to come.

SPOILER ALERT (for tomorrow's countdown) - The Broncos' were coming off their 1977 Super Bowl loss in 1978, but the hangover didn't affect the works too badly. The Broncos finished 10-6 and won the AFC West for the second year in a row. The Red Miller-led Broncos ultimately lost in the first round to the Pittsburgh Steelers, 33-10.

78 was the number of points scored by Denver's leading scorer (among skill position players) in 2012. Guess the player's name in the comments!