If you've yet to talk football or life with our member Jeremy Bolander you're missing out. He's someone I can honestly say has impacted me as a writer and football lover in general. I remember back to October when I was given a friendly nudge by Kirk and John to start doing film stuff. Jeremy's initial words encouraged me--not because I had done an excellent job or understood the nuances to the game, but because they inspired me to keep at it. I'm just some guy with a computer and gamerewind, but even with limited tools I can honestly say I understand the game so much more 8 months later and Jeremy is a big reason why. Thanks for encouraging me brother!

With the addition of Quentin Jammer, who stays and who goes in the Broncos secondary?

I think we need to look at the defensive backfield as its own unit, similar to saying "offense, Defense, STs," our language needs to update and at least split Defense into the concepts of backfield and front-7. In the long run I think it will simplify things.

I felt like last year, with Woodyard wearing the mic'd helmet, that there were actually two defensive calls coming in, one for the front-7 and one for the backfield. This isn't an unheard of idea, but it certainly isn't business as usual either. My guess is that Rahim is probably the point man for the backfield call, but it is just a guess.

Where this becomes most evident is in th 4-2-5 formation, where it is common at lower levels to have the 4-man shell run independently of the front-7...they make their own reads, call their own coverage sides. Looking at them as an independent unit (which would be a great topic to cover as far as scheme goes) might lead us to a different conclusion than normal in regards to the trainingcamp and 53-man rosters. I figure that in terms of the 53, Denver will keep at least one more DB than has been typical over the last five years, while acknowledging that performance in camp could dictate they drop a DB and roll with another LB, or whatever. Theory only gets us to camp, and after that, the chips fall where they may.

Our starting 3 CB will ideally be 3 tough, fast, press-man corners, physical attackers who can mirror an opponent and be tough to beat at the line. (we are looking for leverage and confusion)

Our starting Free Safety needs to know all the calls and be able to range from single high coverage. He needs to be FAST. He will need to be able to take a robber role when we roll out a cover-2 look.

Our starting Strong safety needs to truly be STRONG. He will be taking on OL from time to time, and he needs to hold up. HE is the chess piece that creates 8 man fronts when we need them.

Our starting Weak Safety needs to be fast in the backpedal, able to move backwards in bracket coverage when we are pressing hard at the LOS. He will be responsible for TEs and flankers a lot of the time, and he is the piece that determines where our seams occur, so he should be smart, or at the very least, coachable and disciplined. He also needs to be STRONG. He will almost always present as part of the 8-man front. If this sounds like a hybrid LB/SAF to you, good job. The way Del Rio deploys this weak safety will determine whether Denver wants to run plays inside or outside (inside has greater leverage, but outside has the better tackling, IMO) and this will probably be opponent dependent.

That right there is 6 players, though like I mentioned, that weak safety could be a DB, it could be a LB... Danny Trevathan and Leohnard both filled the role at times last year, I expect that Denver will maintain that flexibility this year as well.

So, long story short, for numbers I would roll with 5 CBs and 2 flex LB/SAF/DB... and 3-4 SAF.... Adjust the numbers based on talent (maybe we have more talent at CB than safety and we ask a CB to take on WS duties... though what I laid aout above is ideal...unless that CB is strong, it likely won't work.

Quinton Carter, Rahim Moore and Mike Adams are locks, as is David Bruton and Omar Bolden as the special teamers. Never mind I think Bolden may be on the cusp purely because of the depth at DB, you have to at least be borderline average to stay. That's six so far and teams usually carry 8-10 DB's. Obviously Champ and Harris are locks at corner, that makes 8. Webster will make it because the Broncos just drafted him.. Now I hope DRC and Quentin Jammer don't turn into another Tracy Porter or Drayton Florence, but there is always that outside chance. I like DRC and think he can succeed, his talent is there as well. Pay and proven production will keep him on the team. So the locks for me are, in no real order:

That leaves one or two spots left for:

Of those three I think Bolden makes it since he still very young and can play ST. I also think Jammer has the edge over Carter but we said literally the exact same thing last year with Porter and Florence beating Carter so who knows. 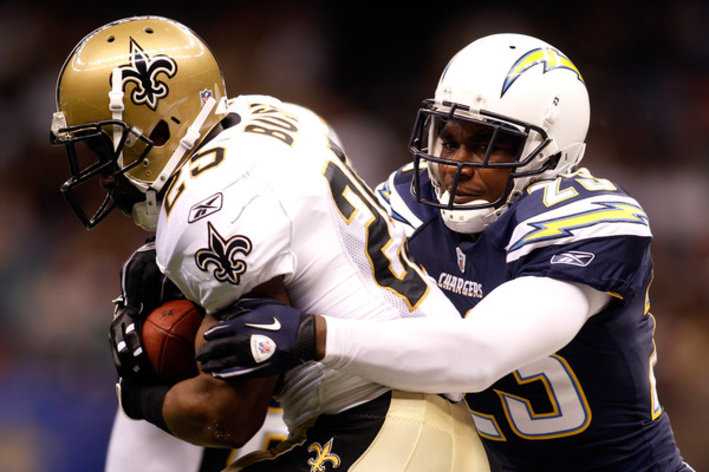 I have 4 guys battling for 3 spots. They are Mike Adams, Quentin Jammer, Quinton Carter, and Tony Carter. Your locks are Champ, DRC, Harris, Webster, Bolden, Moore, and Bruton. This secondary is so flexible though, you have several players in the mix that can play both safety and corner--This might be the deepest and most talented position group on the roster and it should make for one hell of a training camp!

With McGahee having failed to make it to both phases of OTA's, is he on the chopping block?

Is he on the block, yes, but so is every back on the team besides Montee Ball and Ronnie Hillman purely because Elway drafted them. Is he on the thinnest ice, also yes. I know Fox and Peyton know how good McGahee can be when healthy, he's easily the best back on the team, without question he's a Pro Bowl running back, but if age and injuries have caught up to him than he could be on the out. Especially when you take into account Moreno is younger and cheaper, it's hard to see him safe unless he's back to 100%.

I have no doubt that both Peyton and the Broncos want to keep him on board, the question is at what price and in what role. For quite a while now, I've been of the opinion that McGahee's future is in McGahee's hands. Paying him the 11th highest RB salary in the league - to a 32 year old running back that's coming off injury.. it was never a real possibility. My guess has been that the Broncos approached him about a pay cut and a reduced role once they drafted his replacement. I've also guessed that they've probably given him permission to quietly speak with other teams during this process.

The Broncos don't want to rush the decision, because there is no need to do so. If Ball stumbles to take the reigns, or if there's an injury elsewhere, the Broncos may still need Willis. And maybe that's what he's forced to bank on at this point. Baring that, he'll either swallow his pride and take less role and less play, or he'll play elsewhere.

In an ideal world, McGahee stays....along with Moreno and they team up with Montee Ball/Ronnie Hillman to provide one hell of RB group. This isn't an ideal world though...this is reality. Reality is McGahee is old, coming off of injury, has put the rock on the ground too much recently, and makes a bit too much for an old, breaking down, fumbling back. I said a while ago him and Knowshon are battling for one spot. I still think that is true, but having Moreno at a cheaper rate with less wear is the best option especially if Montee can be the #1 guy. So yes, Willis is on his way out. We all are--act accordingly;P

Do you have a Sunday tradition for Broncos games?

Whenever possible, I try to watch the game with my pops. He's the entire reason why I'm a Bronco and football fan. Growing up when I played 4-years of pop-warner ball under the PAL league here in North Denver (North Denver Broncos), he went to every practice. Every Saturday morning was up to make me my pre-game meal of eggs mixed with fried potatoes. He spent time throwing the ball with me in the alley as I pretended the end of the pavement was the boundary marker and tried mostly with success to keep both feet in while making the catch. I'm one of the fortunate ones that can say my pops cared and loves me, so Sundays are special. Even when I lived out of state for three years, I would always call him up after the game to talk about it. I've had the honor of taking him to a few games the past five years and each one is a memory I'll never forget. So thank you "pal", here's a big Mile High Salute to my dad! 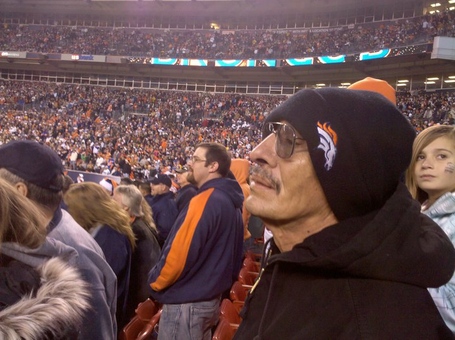 What is your Denver Broncos Sunday tradition?