10.6 points per game, that was the dominance of "The Orange Crush." They were an attacking 3-4 defense coached by Joe Collier. Sacks were still not an official stat tracked by the NFL, but the starters on defense amassed 23 INT, and recovered 16 fumbles which gave the Broncos a +12 turnover differential, a mark that was good enough for 5th in the entire NFL.

Teams couldn't run against them, they ranked 1st in the entire league against the run. They gave up a lot of yardage passing--27th out of 28th. But again--teams had trouble scoring, and despite the passing yardage ranking, they held opposing QB's to under 200 yards in the air 10 times. In the regular season, "The Orange Crush" held teams to 14 or less points 13 times in 14 regular season games. The only team to score more than 20 were the Oakland Raiders (Broncos lost 24-14). In fact, here's a look at their numbers throughout the regular season:

Weeks 7 and 14 marked the teams' only losses in the regular season as they managed two separate 6-game winning streaks. They were equally good at home and on the road finishing with a 6-1 record in both situations. Going into the 1977 playoffs as the AFC's #1 seed, the Broncos would face off against three opponents they had already met in the regular season: Pittsburgh, Oakland, and Dallas.

We know that in the playoffs, nothing comes easy, and the Steelers who would win 4 world championships in the 70's, would provide one hell of a test. The two teams alternated scores until the Steelers tied the game at 21 in the 4th quarter on a Terry Bradshaw 1 yd TD pass. Three straight Broncos scores--2 Jim Turner FG's plus a Craig Morton 34-yard TD pass to Jack Dolbin sealed the deal for a Broncos victory 34-21. 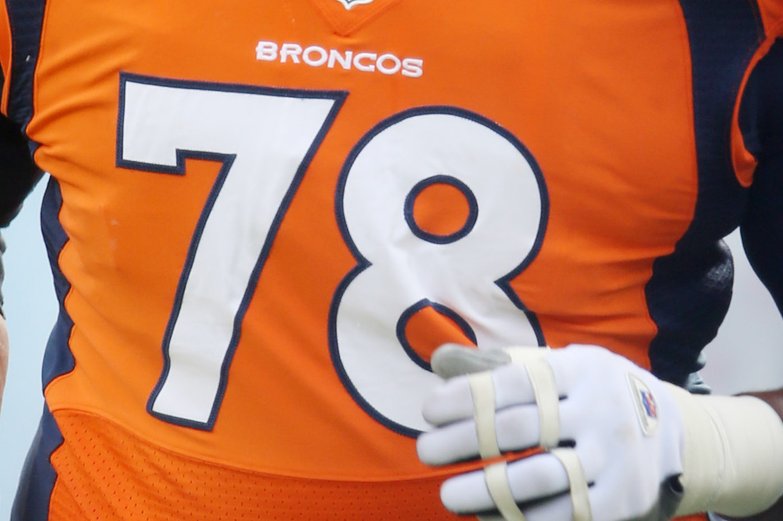 Though the offense only racked up 258 total yards, the defense once again caused four Steelers turnovers which was more than enough to provide the offense with great field position and scoring opportunities. Tom Jackson was the defensive star of the game intercepting two passes, and recoving a fumble. Craig Morton provided a solid performance tossing two TD passes and no interceptions. Terry Bradshaw was harassed all day and only put up 177 yards on 37 attempts (4.7 average). This victory would set up an AFCCG date with our most bitter rivals the Oakland Raiders.

What a playoff season when your team can play both on Christmas Eve and New Years Day huh? Da Raiduhz were the defending Super Bowl Champions. Our "Orange Crush" once again lived up to their reputation forcing 3 Raider turnovers. In a game played with a wind chill of 4-degrees, the Broncos led pretty comfortably the entire game, though the 20-17 final score seems to tell a different tale. After an initial Raiders FG, the Broncos rattled off two consecutive TD's including a beautiful 74-yard strike from Craig Morton to Haven Moses. Ken Stabler hit Dave Casper for a TD in the 4th quarter to trim the lead to 14-10. Morton to Moses would seal the victory as the Broncos managed to run the clock out with 3:16 remaining in the game after the Raiders connected for their final score of the game.

There was a bit of controversy however. After a fumble recovery gave the ball on the Raider 17-yard line, and the offense managed to get the ball to the 2, RB Rob Lytle was hit by Raiders safety Jack Tatum and the fumble was returned for a TD.....except the official blew the play dead. Later on in the game WR Jack Dolbin made a spectacular TD catch that was ruled incomplete.

The Broncos were Super Bowl bound for the first time in history, and they would complete the trifecta of rematches with the NFC representative Dallas Cowboys.

The "Doomsday Defense" v. "The Orange Crush", Craig Morton v. Roger Staubach. This game was not short of story lines. The thing that dismantled the Broncos Championship hopes was the same thing that got them there: turnovers. The Broncos committed 8--6 of them would come in the 1st half alone. Despite all the opportunities, the Cowboys only led 13-0 going into halftime.

The defense was hanging tough and doing its best to keep the team in the ball game. The offense showed some life taking the 2nd half opening possession down the field to get on the scoreboard with a FG 13-3 Dallas. Again the defense held on the ensuing Cowboys drive, but Morton was sacked on 3rd down and the Broncos punted right back.

Then the backbreaker. On 3rd and 10 from the Broncos 45 yard line, Staubach completed a beautiful deep TD pass to Johnson to make the score 20-3. With how inept the Bronco offense had been and how good the Cowboys front 7 had beat up our offensive line, a 17-point deficit seemed like 50.

Craig Morton was pulled after his first pass on the ensuing Bronco drive was almost intercepted. He would finish the game 4-15 for 39 yards and 4 INT's. Though the Broncos would score with backup Norris Weese to make the score 20-10, that is as close as they would get ultimately losing the game 27-10.

The "Doomsday" defense deserved all the credit in the world. "The Orange Crush" never gave up, they were just put into bad situation after bad situation. I don't think you can ask a defense to play any better than only giving up 10 points off 6 1st half turnovers. Cowboys DT Randy White and DE Harvey Martin were co-MVP's marking the one and only time that has ever happened. The dream season was over.

Lyle Alzado was drafted by the Broncos in 1971 79th overall (4th round). He spent his first 8 seasons as a Denver Bronco playing both DE and DT. During that time, Alzado racked up 8, 10.5, 13, 7, 8, and 9 sacks respectively for a 8 year total of 69. In 1976 he had blown out his knee on the very first play of the season. This one injury changed the course of Broncos history as it necessitated the move from a 4-3 to a 3-4 defense--the same defense that would be known as the "Orange Crush".

Joe Collier said of the move "We were a four-man line team, then one year we lost Lyle Alzado on the first play of the first game with a knee injury, so we decided to switch over to a 3-4. We had more good linebackers than we had linemen. We had been playing the 3-4 a little bit, but now we went to it fulltime."

Heading into 1979, the Broncos and Alzado were in a contract dispute and he was traded to the Cleveland Browns where he played the next two seasons.

Finally, in 1982, Alzado made the move to the dark side signing with the Raiders. He was voted 1982 comeback player of the year. In 1983, Alzado and the Raiders won the Super Bowl. When it was all said and done, Lyle Alzado was a 2 time pro bowler, 3 time all pro, AFL/AFC player of the year. He played in 196 games and logged career 112.5 sacks.

But there was a darkside to the NFL in that period, steroid use. Alzado was one of the first players to ever admit to steroid use (via Wikipedia):

I started taking anabolic steroids in 1969 and never stopped. It was addicting, mentally addicting. Now I'm sick, and I'm scared. Ninety percent of the athletes I know are on the stuff. We're not born to be 300 lb (140 kg) or jump 30 ft (9.1 m). But all the time I was taking steroids, I knew they were making me play better. I became very violent on the field and off it. I did things only crazy people do. Once a guy sideswiped my car and I beat the hell out of him. Now look at me. My hair's gone, I wobble when I walk and have to hold on to someone for support, and I have trouble remembering things. My last wish? That no one else ever dies this way.

Though Alzado developed brain cancer that ultimately killed him in 1992, steroid expert Norm Fost debunked the theory that the steroid use led to his cancer in a 2008 documentary entitled "Bigger, Stronger, Faster."

Perhaps my earliest memory of the the #77 in Broncos history is of Karl Mecklenburg. He was always one of my favorite players growing up. "The Snow Goose" or "Albino Rhino" as he was called was drafted in the 12th round (310th overall) by the Denver Broncos in 1983. He was an inside linebacker that packed a punch.

Karl played his entire 12 year career as a Bronco starting in 141 career games and appearing in 180. He was consistent getting to the QB as a MLB racking up 79.0 sacks in his career which is good for 2nd all time in Broncos history behind Simon Fletcher's 97.5.

Since retirement in 1994, Karl has spent time as a motivational speaker as well as founding a charity called REACH that encourages child literacy and education.

- 1977 was Craig Morton's first season as Denver Broncos starting QB. The Broncos had traded for him that offseason.

- In week 5 with 1st place on the line against two 4-0 teams, the Broncos stormed out to a 30-7 lead. Late in the game, LB Tom Jackson recovered a fumble in front of the Raiders bench. He picked up the ball and waived it in Raiders' Head Coach John Madden's face screaming "It's all over fat man!"