Denver's rivalry with the Chiefs is another one that stretches back to the beginnings of the American Football League. It started on October 30, 1960 when the Broncos hosted the Dallas Texans in a game which Denver lost 17-14. The Chiefs spent their first three seasons in Dallas playing as the Texans before moving to Kansas City (and becoming the Chiefs) for the 1963 season. The Chiefs won the first eight meetings, nineteen of the first twenty and twenty-five of the first twenty-seven. It was not until a 14-10 Denver win on November 25, 1973 that the Broncos could begin to claim anything approaching parity with their division rivals. The two teams have been fairly evenly matched in recent years with Denver winning three of their last five meetings.

The first of those five games came on Week 13 of the 2010 season. The Broncos had defeated the Chiefs in Denver just three weeks prior to this meeting. Denver played abysmally in this game. Kyle Orton completed just 32% of his passes for 117 yards and was sacked four times and fumbled late in the game to kill a Broncos drive. The Denver defense was gashed by the Chiefs running attack, surrendering 185 rushing yards. The lone bright spot for Denver was seeing Knowshon Moreno come alive and rush for 161 yards on 23 carries -- an incredible 7.0 yards per carry. Kansas City won this low-scoring affair 10-6. 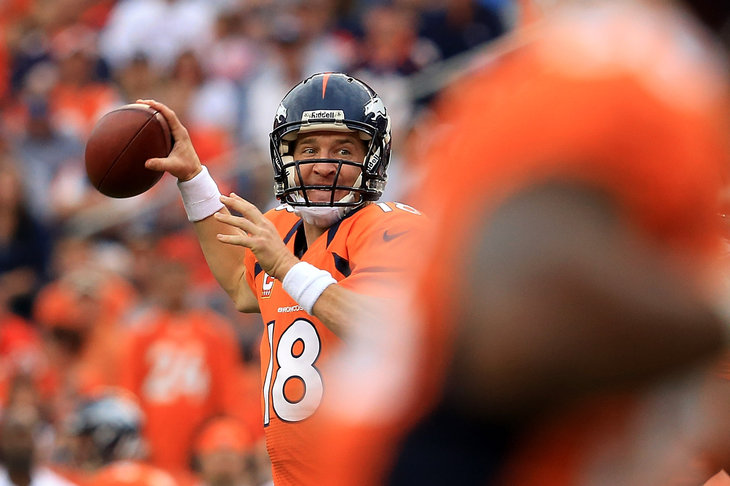 The teams next met in Kansas City on Week 10 of the 2011 season. This was another low scoring game with Denver quarterback Tim Tebow completing just 2 of 8 passes for 69 yards and a touchdown. This difference this time was that six Broncos running backs combined for 244 yards and a touchdown. Denver jumped out to a 7-0 lead in the first quarter and led 10-0 at the half. Kansas City fought back with a touchdown in the third quarter to make the score 10-7 entering the fourth. In the fourth quarter, Tebow completed his second pass when he connected with Eric Decker for a 56-yard touchdown. This made the score 17-7. The Chiefs were able to add one more field goal to bring the score to 17-10 but were unable to successfully complete an onside kick attempt with eleven seconds left.

The third game of these last five meetings was another low-scoring affair and Denver's second loss out of the first three meetings. This was the 2011, Week 17 meeting in Denver. This game featured a lot of ball movement but almost no scoring. Kansas City had 12 drives in the game that resulted in 8 punts, running out the clock at the end of the first half and at the end of the game, 1 missed field goal and a touchdown in the first quarter. The Broncos also had 12 drives, but theirs resulted in 9 punts, a fumble, a field goal and an interception with 19 seconds left that iced the game for the Chiefs. The final score stood at 7-3.

The two meetings during the 2012 season took a very different turn with Peyton Manning at the helm. The first came in Kansas City on Week 12. The Chiefs built a 6-0 lead on two first quarter field goals while the Broncos missed a field goal attempt in that same quarter. Manning shook off an interception early in the second quarter to lead a 94-yard touchdown drive on Denver's next possession for a 7-6 halftime lead. After Matt Prater missed a field goal on the opening drive of the second half, Kansas City took a 9-7 lead on Ryan Succop's third field goal of the day. Manning wasted no time on the Broncos' next possession, taking just 7 plays to move 80 yards for a touchdown and a 14-9 lead. Prater finished out the scoring with fourth quarter field goal that put the final score at 17-9.

The second meeting in 2012 took place in Denver on Week 17. This game, at best, can be called a blow-out. The Denver defense stifled the Chiefs offense, holding it to just 8 first downs in the game, 119 yards and sacked Kansas City quarterback Brady Quinn 4 times. On the other side of the ball, three Broncos running backs gashed the Chiefs defense for 165 yards (Lance ball 66, Jacob Hester 55, Knowshon Moreno 44) -- the team had a total of 172 rushing yards -- and two touchdowns. At the same time, Peyton Manning picked apart the Kansas City secondary, completing 76% of his passes for 316 yards and 3 touchdowns. The Broncos led 7-0 at the end of the first quarter, 21-3 at the half, 35-3 at the end of three quarters and the final score stood at 38-3.

Overall, Denver is 49-56-0 in the regular season versus the Chiefs and 1-0 in the postseason. How do you like their chances in November and December?