For those that suffered through the garbage that was early Broncos existence, you guys deserve a purple heart! I just can't find the mojo to write about such a bad team, so rather than half ass an article about the 1970's Broncos, I'm going to introduce another debate.

Now for before everyone grabs their rocks and spears and prepares a lynch mob, I'm not debating All Time greatness here. Rod Smith is the greatest Broncos receiver of all time PERIOD. So what you have to do (and this proves difficult for some, even on the staff) is remove all nostalgia and sentimentality 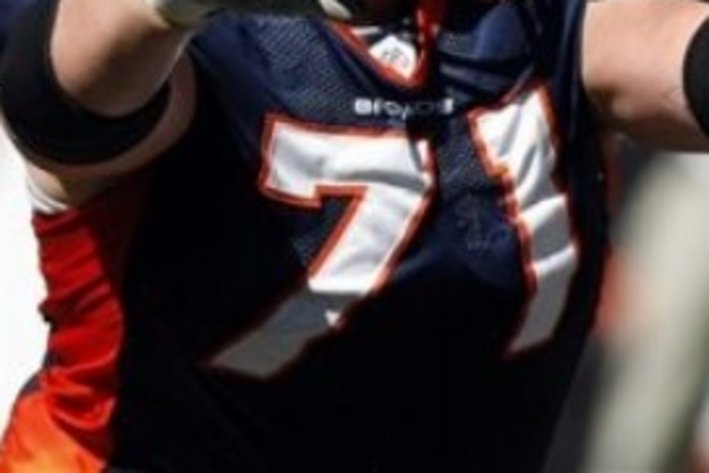 Bottom line, one year with both players playing at their highest level, who is your starting #1 receiver? Again, we're not talking history, we're talking right here right now.

As evidenced in my All-Time 53 man roster yesterday, I choose DT.

My argument? Simple. Demaryius Thomas is a better talent. He's more physically skilled. He's faster, stronger, and provides more of an imposing presence on the outside. I mean, do you really see Rod Smith making catches like these?

The answer is no. What I'm saying right now, is that DT's skillset is more desireable to me as a #1. One of the only things Rod Smith has going for him is route running and we all saw that last season DT improved by leaps and bounds to the point where he was perfecting double and triple moves.

As far as the staff? Kyle and Ian would take Rod Smith.

Scotty, Pete, and I have DT.

Here's some of the juicy banter that has gone back and forth:

What this article was about is who would make the 53 man roster, and in all honesty, Rod Smith made the 53 man roster. He just didn’t START ahead of DT, which is completely understandable seeing DT is a physical freak of nature.

If the Broncos drafted Calvin Johnson (as close to as identical to DT as anyone in the league) and we made this list again, would you argue still that Smith starts ahead of Megatron? You probably wouldn’t because Megatron has the cute nickname and better receiving yards due to having much better QBs (besides last year) than DT did as well as not having foot injuries (including a torn Achillies).

The point here is that it is any given year, not lifetime achievement. When ranking the Broncos all-time greats, you have a strong point that Rod Smith SHOULD be #1, but when deciding on who would be a starter on the 53 man roster, you can’t take lifetime achievement into account or else Jerry Rice would have started for us in the 2000’s instead of retiring cause Shanahan told him that Rod was better. When you look at it through that frame of reference, it’s really easy to see why DT would be the starter and Rod the backup. --Big Pete

You’re just pissing me off now. Hard work, determination, leadership? You make him sound like a coach.

Rod Smith was FAST, and an excellent route runner with AMAZING hands – amazing hands. He was a KICK YOUR ASS blocker. He was smart, understood defenses.

Demaryius Thomas can out-jump Rod Smith. Congratulations. Right now Rod Smith at his prime does everything else a wide receiver needs to do better than DT does. You are undervaluing Rod Smith, and it’s tragic.

I get it. I see all of your comments here saying I don’t get it. I get it. It’s not about legacy. It’s about Rod Smith in his prime vs. DT in 2012. Give me Rod Smith, thankyouverymuch. I’m not buying DT after one – ONE! – season that wasn’t as good as Rod Smith’s best! --Kyle Montgomery

Rod will find a way and fight harder. -Kyle Montgomery

"Rod will find a way and fight harder" that's that underdog, little engine that could line Monty...that tells you right there you know DT is a better physical receiver. - Bronco Mike

now Ian is going to say Marshall is a better physical speciman than DT? That argument is weaker than Dr. Seuss Ian :P --Bronco Mike

So there you have it. The folks that choose Rod Smith are having a hard time letting the past go, while the guys that are choosing DT can objectively assess talent aside from nostalgia :D

Seriously though, if you had to choose between Rod Smith and Demaryius Thomas to be the starting #1 on your team, who would it be? One shot, one year only, both are in the prime of their careers. Who would you choose?

The 1970's Broncos opened their season with three straight victories before losing 8 out of their next 11. Floyd Little was the Broncos only pro bowl selection that year...and he made it on the strength of averaging just 64.4 yards rushing per game.