He used to pee his uniform pants on Sundays...true story:

Mark Schlereth's nickname is Stink, which is short for Stinkman, which came from a dish the Eskimos of southwest Alaska would eat called "stinkhead." One day, Schlereth, a native Alaskan, is regaling his teammates with stories about stinkhead. How it's made from the whole head of a king salmon, which is somewhat larger than a football, and how it's prepared by wrapping the head in the long grasses that grow along the rivers and streams and burying it in a moss-lined pit in the ground for four to six weeks, where it rots. Just rots, with the bones softening up until the whole head has a consistency similar to mashed potatoes. The Eskimos then dig up the fish head — and presumably hold their nose because the smell is absolutely rancid — and eat it.

"I was telling them about stinkhead the meal and it just so happened I regularly peed my pants," Schlereth said. "Pretty much every game I did. I was already drenched in sweat so it was no real difference to me. So later the nickname got shortened to just Stink. Hey — I was miserable anyhow out on the field, I wasn't going to hold it in and become even more miserable."

I was trying to think if I do/have done anything that extreme in my own profession as a teacher or musician. Nope....only thing I used to do was keep my saxophone reeds inside a sealed container full of water to keep them from warping. After a few days or so, especially when it was warmer, the reeds would start to grow mold and I would play them like that. Eventually I started keeping them soaked in a vile of strong grain alcohol to prevent molding and then moved to listerine. Can't ever say I pissed my pants on stage in the middle of a tune or lecture to avoid using the bathroom though..

"Stink" played 12 seasons of pro football winning three world championships over the course of his career. The Washington Redskins drafted him in the 10th round (263rd overall) in the 1989 NFL draft. He was a two time Pro Bowl selection (1991, 1998) and helped anchor the lines that led to Terrell Davis' record setting run in the late 90's. Mark won three super bowls, one with the Redskins and the other two here (26, 32, 33). He started 140 games over the course of his career. 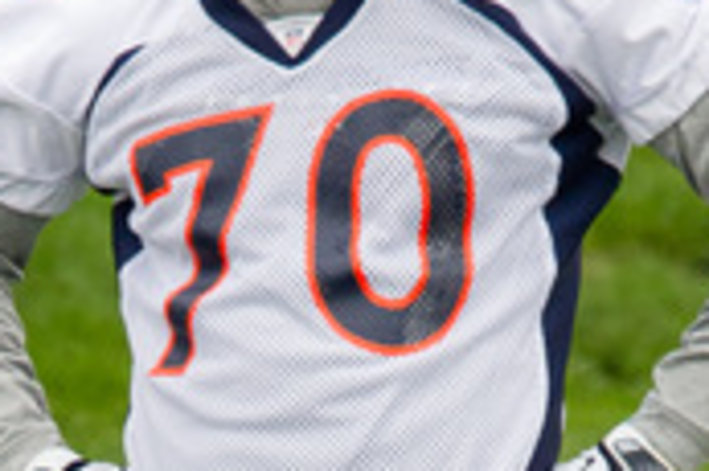 The reason I came out here today was to announce that I have just signed a six-year, $42 million contract to extend my career with the Denver Broncos. The truth of the matter is, after going through my 15th operation on my left knee last November, it became painfully obvious that I couldn't sign a six-year contract for $42 worth of Tupperware. I started to realize in the last three months of free agency that there is not a lot of market for a 6'3", 245-pound guard that is 35 years old and beat to a pulp."

Mark Schlereth would go on to work for ESPN where he now hosts NFL live.

Anyone ever had "Mark Schlereth's Stinkin' Good Green Chile?"

During the course of his storied career, Mark Schlereth underwent 29 different surgeries, 20 on his knees alone.

Though the 1969 Denver Broncos won only 5 games, both Floyd Little and Rich Jackson were 1st team All-Pro selections.