Let me tell you a story about the....greatest NT in Denver Broncos History

Rubin Carter anchored the Broncos "Orange Crush Defense" and was the first true NT in NFL history. Today we think of large men 320 or more playing NT, but in his era, Carter stood 6' and a rather lean 255lbs. Rubin was drafted in the 5th round (121st overall) of the 1975 NFL Draft. The man started and ended his career with the Denver Broncos starting 154 games--mostly at the NT position. In both his rookie and sophomore seasons as a pro, Rubin started off as a defensive tackle. When the Broncos switched to a 3-4 defense due to the injury suffered by DE Lyle Alzado, Carter was moved to the nose full time.

According to Kaptain Kirk, Carter accumulated 1,036 tackles, 33 sacks, and 13 fumble recoveries over the course of his 12 year Bronco career. Rubin was a part of three super bowl teams (SB 12, SB 21, SB 22) starting in two (he did not play in SB 21 because of injury. In his final season as a pro, Carter suffered a knee injury and started only 2 games. The 1986 season would prove to be his final as a player as Rubin retired from the NFL. The Broncos greatest NT in history was named to the 50th anniversary team in 2009.

Post retirement, Rubin stayed close to football forging a coaching career he has carried on to this day:

All of those stops both at the NCAA and Pro level, Rubin was a defensive line coach. He was the head coach of Florida A&M from 2005-2007 posting an overall record of 16-17. This is a little deceiving as his teams had winning seasons the first two years as a coach. He was fired from this position after the 2007 season when the Rattlers finished a disappointing 3-8.

The thing most Broncos fans probably associate Rubin Carter with was the Sports Illustrated cover he was on that featured a story on Denver's 3-4 defense. I recently purchased a copy of this issue and it will reside proudly in my mancave along with other fantastic Bronco swag. 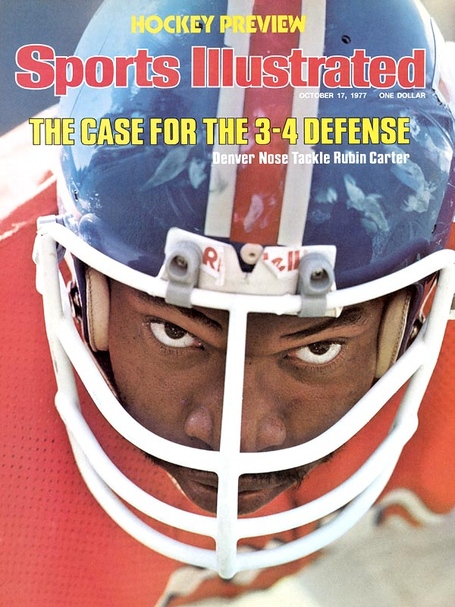