67 is one of those numbers in Broncos history that has very little to offer. In 1967, our Broncos finished yet another losing season with a record of 3-11. Ho Hum. Their defense allowed 29 points per game yuck. Future HOF RB Floyd Little rushed for just 381 yards, bleh. Add to that the fact that the greatest Bronco to wear #67 was G Doug Widell (meh) and you get yourself a summary of both the 67th win in Broncos history and the 67th loss in Broncos history.

The 67th loss in franchise history came at the hands of the Oakland Raiders on Sunday, November 20th, 1966. Broncos kicker Gary Kroner nailed a 45 yard FG in the 2nd quarter to give the Broncos a 3-0 lead. This would be their only score of the game. 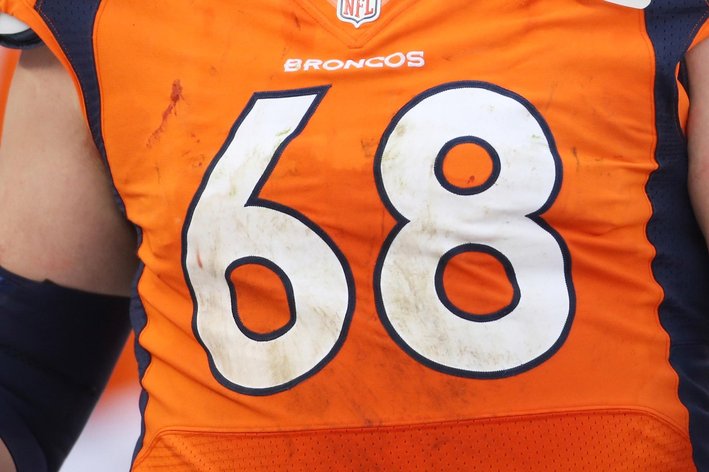 In Tebow-esque fashion, Raiders QB Tom Flores completed just 6-18 passes on the day. Like the former Broncos QB, he made them count hitting Art Powell and Larry Todd for TD passes en route to 141 yards through the air (20.4 yards per completion).

Raider kicker Mike Eischeid concluded the scoring with a 12 yard FG. Incidentally, a 12 yard FG is impossible in the modern era. Back then goal posts were placed at the goalline, not 10 yards back. Given the 7 yards the holder lines up behind the line, the shortest FG today would be an 18 yarder (kicked from the 1 yard line....7 yards plus 10 for the endzone).

Bronco QB Max Choboian completed just 9 of his 30 passes for 93 yards (a pathetic 3 yard per attempt average). The Raiders won 17-3

While the Broncos 67th loss happened in 1966, it would take them EIGHT MORE YEARS to notch their 67th win as a franchise. On Sunday, December 8th 1974, the Broncos defeated the Houston Oilers 37-14 at home. Otis Armstrong was the star of the game rushing for three TD's and 183 yards on 31 carries. Charlie Johnson finished an uncharacteristically efficient performance (at least for the time) completing 15 of 21 passes for 219 yards and a TD to Jon Keyworth. Haven Moses also caught a 12 yard TD from QB Charley Johnson and Jim Turner added a 43 yard FG to complete the scoring.

It is still amazing to me that it took the Broncos nearly 15 full seasons to compile 67 wins. That averages out to 4.47 wins per season. The fact that this franchise stayed afloat and eventually prospered is a testament to our early fans who cheered and supported their team no matter what. It isn't a coincidence that the Broncos have sold out home games for 43 consecutive seasons (dating back to 1969)--they have the best fans in the NFL, bar none!

The Broncos faced off with their AFL rival The Boston Patriots for the 15th time in franchise history. Through 1966 they had been on the Broncos schedule twice a season. In their 15th meeting, the Broncos beat the Pats 26-21. That victory upped their head to head record to 6-9.

Overall, the Broncos hold a 27-19 record all time against the Pats.

John Elway was the Patriots kryptonite during the course of his career: