The 1993 Denver Broncos faced a year of transition as longtime head coach Dan Reeves had been fired following the 1992 season. Great defensive mind Wade Phillips was given the reigns and in his first season as Head Coach, the Broncos managed a playoff appearance.

Whether it be the ousting of longtime nemesis Reeves or simply a resurgence after an injury plagued season, John Elway had a career year for the Broncos. He set highs in completions (348), attempts (551), completion percentage (63.2), yards (4030), and interception percentage (1.8%). It is crazy to that this was the only season in Elway's career when he surpassed 4k yards passing.

Shannon Sharpe was once again Elway's favorite target with 81 receptions, 995 yards and 9 TD's. On the defensive side of the ball, Simon Fletcher would notch his final double digit sack season with (13.5) sacks. In fact the Broncos as a team found a resurgence in getting to the QB registering a total of 46 sacks as a unit. Another Hallmark of Wade Phillips defenses shows up in the way of turnovers as the Broncos forced 26 turnovers - 8 different Broncos intercepted at least one pass. 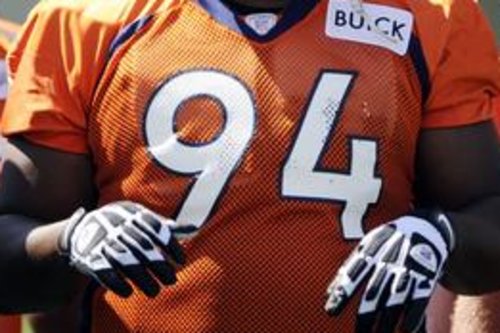 Take a look at one of the greatest matchups of all time!

Though the team finished 9-7 with a wildcard berth, they were plagued by another set of numbers - missed opportunities. The Broncos lost 5 games that season by a total of 15 points (all margins were by a FG each time). Rookie kicker Jason Elam was a big part of that. Elam converted just 74.3% of his tries (26/35). In fact this season was eerily similar to the struggles Matt Prater has faced during his tenure. Elam was just 4/10 from 40-49 yards. Let's take a look at each close loss:

Two losses by a combined 6-points to the Raiders. They would meet again in the wild card round. This time the Raiders would win by a wide margin 42-24. If you remember the name Jeff Hostetler, he's the QB that lit up the Broncos secondary averaging a whopping 15.5 yards per attempt. John Elway did his part throwing for 307 yards and 3 TD's of his own, but the defense just couldn't stop the Raiders attack. The teams traded scores until halftime when the score was tied 21-21. From there three second half rushing TD's by Napoleon McCallum sealed the deal. 93' will forever be known as the year the Raiders swept the Broncos 3-0.

Kicker Jason Elam was drafted by the Denver Broncos in round 3 of the 1993 NFL draft. He was taken 70th overall ahead of future Broncos Safety John Lynch who was selected 82nd overall.