The AFC Divisional game and AFC Championship game from the 1991 season featured the highest of highs and the lowest of lows. One was a comeback masterpiece of John Elway proportions, the other, well an Epic Fail.

Now before some of you point out to me that we are on #91 and I'm looking at games from 1992--these playoff games are an extension of the '91 season. Since I'm the one writing these articles, I will take any chronological liberties I please;)

The 1991 Denver Broncos finished a stunning 12-4 (despite three losses in the AFC West) which was good enough for the #2 seed and a first round bye. The Oilers on the other hand finished at 11-5 and came into Mile High having beaten the New York Jets the week before 17-10.

It was always an interesting dynamic to face the Oilers and their "run and shoot" offense. Lots of shotgun and spread formations which were uncommon back then. Haywood Jeffires, Drew Hill, and Curtis Duncan provided one hell of a 3-WR attack. Going against an aggressive Phillips defense, it presented issues for both teams. A smart QB like Warren Moon was more apt to get rid of the ball quickly to a hot read against the blitz. If however the Broncos could move things around and keep him guessing, they were more likely to take him down before he even had a chance. 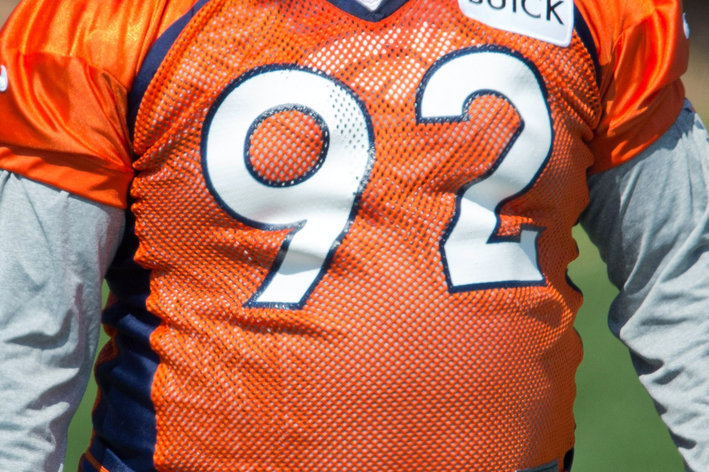 The first half took a bit of adjustment as the Oilers raced out to a very early 14-0 lead. Elway managed a score to Vance Johnson in order to keep the game close, though kicker David Treadwell missed the PAT. 14-6 Oilers. After allowing another quick Oiler scoring drive the Broncos managed a score before halftime to keep the deficit at 8, 21-13.

Going into the 2nd half, both defenses clamped down and the only scoring in the 3rd quarter was a David Treadwell 49-yard FG. In fact the only 2nd half score for Houston was a 25-yard Del Greco FG. It was good enough to provide the Oilers with a slim 24-23 lead heading into....well The Drive II

In clutch Elway fashion, the Broncos converted two 4th downs on the drive including the final backbreaking pass to Vance Johnson that set up Treadwell's game winning FG.

Both top seeds met to decide who would play the Redskins in the super bowl that year. The Broncos once again faced a very formidable foe as Jim Kelly and Thurman Thomas helped lead Buffalo to the 2nd highest scoring offense in the NFL.

Both teams played a smashmouth game of defensive football. The Broncos held Jim Kelly to 117 yards and forced two INT's. Thurman Thomas rushed for only 72 yards on the ground. John Elway threw for 121 yards and a pick before being injured and put out of the game.

Gary Kubiak is loved in Broncos Country for a reason. Before his heyday as our OC, he filled in for Elway in this game and turned in an absolutely masterful performance: 11-12 (91.7%) 136 yards and 3-yard TD run that helped the Broncos cut their deficit to 10-7. Needing a miracle, the Broncos special teams delivered and recovered an on-side kick.

Needing about 25-35 yards for a game tying FG at the very least, one of the worst turnovers in Broncos History occurred:

Denver had plenty of time to get within range of a game tying field goal and needed only a few big plays. Sewell appeared to have made one when he caught a pass from backup quarterback Gary Kubiak and bolted into Bills territory. But Kirby Jackson stripped the ball from Sewell's grasp at the Buffalo 44-yard line and the Bills recovered it.

Sewell made no excuses for his miscue. "I didn't hold the ball like I should have," he said. "It's pretty much all my fault and I can't blame anyone else. I'm probably going to see it 10 or 12 times in my sleep tonight."

Just like this past season with Rahim Moore, however, there was plenty of blame to go around. David Treadwell had missed 3 FG's in the first half from distances of 42, 37, and 32 yards.

"It bothers me inside," Treadwell said. "I realize it's a team game and I just didn't do my part...I was not doing as well as I usually do in warmups," he said. "I realized it was going to be a tough day with the wind, but I just tried to block it out."

The Broncos wouldn't get back to the AFCCG until 1997 when they won it all. The Bills? 4 straight SB appearances and no rings.