Who remembers the "Billboard Man?"

1990 brought about a very lackluster start to the Broncos season. After starting off 2-1, they dropped the next three setting up what would become "the greatest sports publicity stunt" Bob Costas had ever seen. Part-time sports radio personality Rich "G-man" Goins pledged to live on top of a billboard overlooking West Colfax near Federal BLVD in Denver until the Broncos won a game.

The "G-man" would ascend to his new home after the Broncos lost 27-22 against the Minnesota Vikings. As each week came and went, Goins was still perched atop his humble abode. Now, it isn't as if he was up there 24/7. He had an RV parked nearby so he could use the restroom, but that was it. Rich ate meals, gave live sports reports via radio, watched TV, and slept up there--he was attached to a safety harness in case of a fall.

Goins didn't have any idea how long his adventure would last however.

"I thought I'd have a few yucks, get a little publicity and the Broncos would win," he said. "I thought big-time wrong."

Well, his entire ordeal lasted a total of 33 days, within that span the Broncos lost 5 consecutive games.

During that 33 day Goins experienced some interesting things:

- He fought off a case of bronchitis

All the while, The G-Man earned lots of publicity for his career, in fact he admits that this single event is what made his radio career. All good (or bad depending on your perspective) things must come to an end however and they did on a fateful Sunday at home against the Chargers.

On Sunday, December 16th, 1990 the Broncos rattled off 17 unanswered points after an initial Charger FG. Late in the 4th quarter their two score lead put to rest any doubt that the "G-Man" would have to stay on that billboard until after Super Bowl 25. 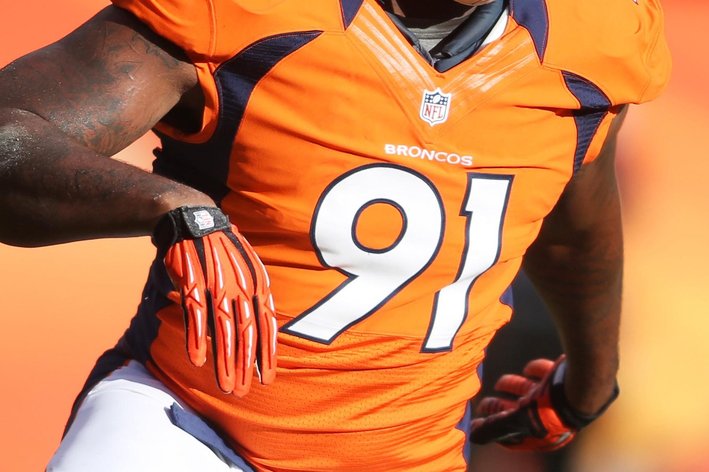 The Drive II followed by an AFFCG blunder

Growing up, I don't remember much about that season except for "The Billboard Man." Each day on the local news they would check in with Rich and actually had a segment that kept track of his time on the billboard. The memory from that final Chargers game is still vivid in my mind--we were all cheering for the Broncos to win so "The Billboard Man" could go home. Life is much simpler when you're a kid;)

After 33 days in Colorado winter aboard the billboard that made Rich Goins' career, the "G-man" descended to a free dinner at the restaurant "Strings" and a $220 bottle of wine from head coach Dan Reeves. Rich Goins went on to have a very successful radio career over the next two decades, all due to the greatest publicity stunt in Denver Broncos history.

Perhaps the guys that put up billboards for Tebow to start should have lived on one until the young quarterback managed to post a 60% completion percentage. They'd still be up there to this day :P