I've thrown that question out quite a bit. In this case however, Danny may be what the Dr. ordered.

I did an exhaustive study on how the Broncos fared when covering the TE. Bottom line, it is an area that needs improvement. It may be less of an issue now that the two headed monster in NE is no more, but make no mistake, there will be teams with strong receiving threats at the TE position that will need to be counted for.

Danny was eased into playing time and really only saw extensive time in one game against the Saints. This was a game where the Broncos lined up in nickel most of the time and Trevathan was charged in man coverage against Jimmy Graham. In fact here are his snap numbers (courtesy of pro football focus): 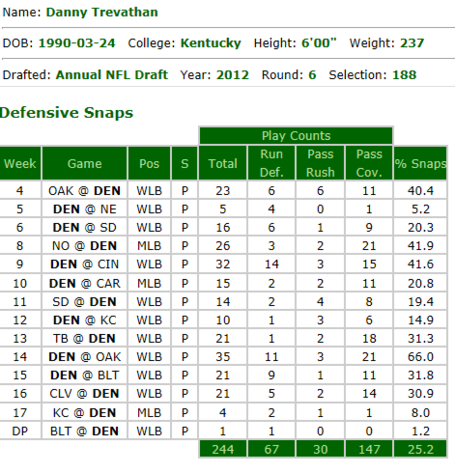 Well, getting to see the data up close, something very interesting sticks out--why was he seemingly phased out the last couple games of the season? Could be that the Chiefs and Ravens offensive personnel choices (more heavy sets) kept the Broncos in their 4-3 base more often? Regardless, we can see that he was used primarily in pass coverage with more than half of his snaps coming in this role.

If the Broncos figure to run their nickel defense extensively in 2013, Danny will see quite a bit of playing time. Let me just give you the initial impressions I've had from watching tape on him. Sometimes he gets overpowered by strong TE's when he tries to jam at the LOS. He gives up size which affects his ability to contest balls that are thrown in a general area--in other words when the QB throws the ball high or outside where his big TE can make a play. He gets fooled by double moves, but also flashes the closing speed to deal with it. When it comes to closing speed at LB, at least in coverage, he is by far the best. Speed in general isn't an issue as I've seen him cover guys like Graham who were motioned to the outside on "go" routes.

Without further adieu, here were the results he posted when an opposing team targeted a TE against him in coverage:

So there's a mixed bag of results. Sometimes he was beat, sometimes he flashed very good coverage abilities. I expect him to grow even more in 2013. Overall he did pretty good for a rookie. None of his targets resulted in a huge play or scoring play so you have to like those results.

I'm a big fan of Trevathan's and I think the Broncos will utilize him more in 2013. What do you think MHR, is Danny Trevathan the TE Killer the Broncos are looking for?