Did the Denver Broncos Improve on Special Teams?

Basically the same unit returned in 2013, but did they get better? Will Trindon Holliday be able to reproduce his amazing 2012 season?

Share All sharing options for: Did the Denver Broncos Improve on Special Teams?

The Denver Broncos special teams last year came up big and helped change the momentum in several big games in 2012. None was bigger than Trindon Holliday's rumble to the end zone in the playoffs against the hated Baltimore Ravens. Having been an avid fan who has watched nearly every Broncos game over the last 25 years, I cannot think of another unit that was so dangerous in the kick return game. Holliday was that good.

Add him to the special teams mainstays in Matt Prater's monster leg, Britton Colquitt's precision punting and David Bruton's leadership and this unit overall can only get better. 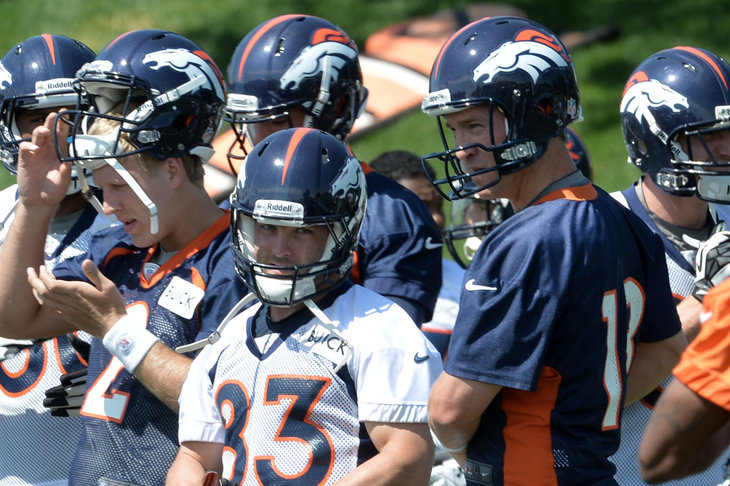 MHR gets you ready for training camp, which is just around the corner!

I am doubtful that the Broncos special teams unit will be able to match or exceed last season's output, but the tactic of "laying it up" opposing punters will choose will likely end up provided much better average field position than last season, giving one of the NFL's most dynamic and explosive offenses a shorter field to rack up 30+ points per game.

In fact, even though the 2012 unit was historically good at breaking open the big play, the team might actually be better off settling for better field position. Often times, a touchdown scoring special teams play only means an already gassed defense has to go back out to try and stop an offense that had likely just scored before the previous kick return. Granted, take the seven points every day, but an eight to ten yard increase in average field position will result in far more points over the course of an entire season.

Matt Prater has had minor accuracy issues between 40-49 yards, but he too comes up big in clutch situations. There are very few kickers in the NFL I'd want booting the ball through with no time left on the clock to win the game. After suffering through the punting woes towards the end of the Mike Shanahan era, its nice to have a keeper in Britton Colquitt. The Broncos brought in competition in Ryan Doerr, but he'd have to be exceptional to unseat Colquitt.

Many players get in on special teams, but these guys are the faces of that unit. David Bruton is easily a Captain and excels at getting to the returner to limit big returns from the opposing team. Overall, the 2012 maybe has a slightly higher advantage because of the big play, but I don't think the Broncos will suffer from that in 2013.

Do you think the Broncos got better on special teams this year?