My day with the Kaptain: Meeting Simon Fletcher

Today I had the opportunity to meet two great people. The first being fellow blogger and friend Kirk Davis (Kaptain Kirk).

Share All sharing options for: My day with the Kaptain: Meeting Simon Fletcher

I had spoken with Kirk countless times over the last year or so at MHR, whether it be when he was still on staff here in the staffer chatroom, or more recently through instant messaging as the Kaptain moved on to BroncoPlanet.com. We had planned on getting together for lunch at some point before training camp and out of the blue, Kirk messaged me last evening with an opportunity to hang out and shoot the breeze.

Today, Demaryius Thomas was going to be signing at the Belmar Xfinity store from 1-2:30 and Simon Fletcher from 2-4 at Dick's Sporting goods in Loveland. The plan was to grab a bite then hit both events and get some swag signed by two Bronco greats.

If any of you have ever met the Kaptain, or interacted with him through MHR or elsewhere, you know a few things about him. First he's one hell of a human being. All those swag giveaways MHR did throughout the season last year--Kirk bought all that stuff on his dime and got it signed at Training Camp and other Broncos outings. Once again the Kaptain's giving spirit manifested itself and he showed up with a sweet old school Broncos hat to give me along with some Broncos glasses and some Von Miller Gatorade.

The first stop on our trip was over to Bill's Collectables here on Broadway. Kirk wanted to grab an old school mini helmet for Simon Fletcher to sign and I wanted to show him an awesome place full of great sports memorabilia. If you want to get something Broncos or even Colorado sports related, this is the place to go. You can find anything from signed and framed jerseys, helmets, mini helmets, trading cards, photos and posters--you name it they have it. Lots of signed stuff from all the major Broncos players throughout history. After spending some time looking around and gawking at all the cool swag in the store, Kirk and I set off for lunch at a local diner.

With as many events Kirk has been to and all the players he met, the 2nd thing you notice is how many great stories he has about his various encounters over history. for the bulk of the next couple of hours, Kirk and I shot the shit about blogging and old "war stories" of going to games or meeting players. Kirk talked a lot about the Denver Broncos Alumni Association and their recent meeting at a country club in Westminster. Mark Jackson, Steve Atwater, and Reggie Rivers are some names he mentioned that are really nice guys who always wear smiles on their face.

Our activities to this point made us a little late to the first signing event as we got there at about 1:30. We were told by the liaison that we could wait in line but were past the cutoff, so there was a chance we could wait and not have the opportunity to meet DT. Knowing it would take an hour to get to Loveland and that Simon Fletcher would only be there from 2-4, Kirk and I decided to leave the Xfinity event go check out Simon Fletcher.

We got there right at 3:00 and found our way to Simon's set up on the floor. Unlike the Xfinity signing, there was no long lines and we were able to get to Mr. Fletcher right away. There was a young kid before us and I overheard Simon talking to him about moving to LB. He said it was the best move in his career because he could use his speed to rush and also avoid those big linemen and their "pancake blocks."

When it was our time to step up and meet #73 I continued from his previous story and asked "Did you ever give those QB's a sloberknocker?" (A sloberknocker is when you hit someone so hard you make them drool like an incapacitated mental patient). He said "you betcha.....in fact there was a game against Seattle at the Metrodome on Astro turf---you know about Astro turf right? About this much padding (using his thumb and forefinger to measure about a couple of inches) over concrete. Rick Mirer was the rookie QB and I'm lickin' my chops all week. The first time I got to him I buried my helmet right into his chest and drove him as hard as I could into that Astro Turf. The rook looked up at me and said "Simon, they lied to me about you---they told me you could hit!". HAHAHAHA!!! How's that for some smack talk? "I got to him five times that game and everytime I hit him he had some sort of comeback like that, at the end I told myself--this guy is going to be great....they started going through coaching changes and it messed with him and he never quite put it together, but I thought he could have been one of the greats."

As he signed our stuff I asked him if he had a favorite memory or game. "There was a game against the Bears at Mile High where "Sweetness" ---Walter Payton (he clarified who he was talking about just incase I didn't know who Sweetness was haha) was still playing. They gave him the ball and I got the tackle. He was one of my idols growing up and I never thought that moment would happen--with two of us being on the field at the same time." Wanting to know a little bit more about that moment, I asked him if he said anything to "Sweetness". He said "you don't trash talk a great" "No no I meant did you say what an honor it was to play with him?" "Boy do you think I was over there trying to shake the other teams' hand in front of 76,000 people?" We all erupted into laughter and I asked him if I could get a picture with him.

Simon sized me up and I'm a big man, he said "Alright but I'm gonna stand up so people don't see you leanin' over me talkin' bout "it's an honor to meet you" We all laughed and as Simon stood up and put his arm around me we would bust out in a chorus of laughs again. Here's why: 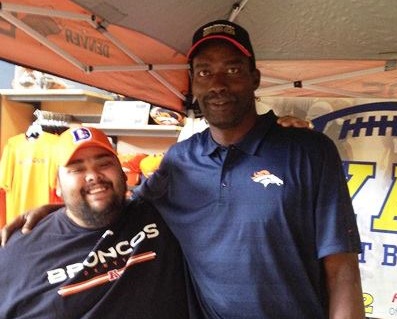 Dude just towers over me haha. Still talking I asked him "When they gonna put you in the ROF?" "About the time Von Miller breaks my sack record." Mr. Fletcher was a hell of a person to meet and a pleasure to talk to. He would be an awesome guy just to sit around with and listen to old war stories.

Today was a great day. Not everyday you get to hang out with a good friend and meet an all time-great. Many thanks to the Kaptain for sharing this experience with me, it's something I'll never forget! GO BRONCOS 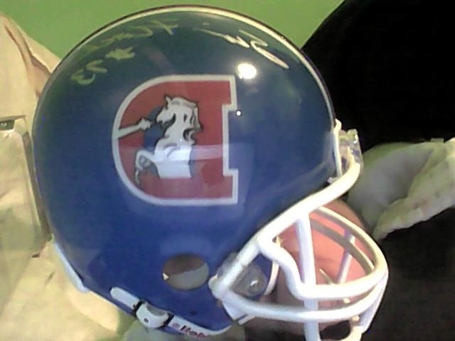