The Broncos no longer have two 1000-yard receivers on the roster... they have three.

Share All sharing options for: Did the Denver Broncos improve? WR edition

The Denver Broncos may be on the verge of one of the most elite passing offenses the NFL has ever seen.

Already the second-best passing offense in the NFL last year, the Broncos went ahead and added this ultra-weapon in the offseason: Wes Welker.

Welker's role as a difference-maker for the Denver Broncos will be multi-faceted. He is another quarterback on offense, reading coverages and determining his route based on what his opponent gives him. But he will also serve as a potent distraction for enemy secondaries, eliminating an opponent's ability to cover both Demaryius Thomas and Eric Decker effectively downfield. Opponents will try to tee off Thomas and Decker and keep Wes Welker in front of them. The difficulty is that, even when well-covered, Wes Welker is impossible to contain. His real strength comes from how he can use his physical talents to make the most of his cerebral ability.

Welker is an excellent route runner, with precise, clean cuts that often leave his opponent stumbling to catch up. He's an aggressive receiver as well; if the coverage the defense presents him dictates Welker run upfield, he will do so, often getting behind coverages for long gains, big plays, and highlight reel touchdowns.

Combined with the challenges Demaryius Thomas and Eric Decker present to any defense, Peyton Manning will simply always have a premiere target to choose from. The 2013 Denver Broncos didn't just improve when compared to their 2012 roster - man for man, these Broncos receivers would compare favorably to just about any trio of wide receivers in NFL history, ever.

Beyond that trio, things are very fluid, with the Broncos relying mostly on in-house players to fill gaps as needed. The drop-off from #3 WR to #4 is cataclysmic, but if the top three remain healthy, a few of these players will be able to take advantage of a year in this offense to leverage themselves into a possibly larger role in 2014. That's because it is a contract year for Eric Decker, who may prove difficult to sign to a long-term extension given Denver's upcoming needs to extend the contracts of players like Zane Beadles (2014 free agent), Wesley Woodyard (2014), and Demaryius Thomas (2015). 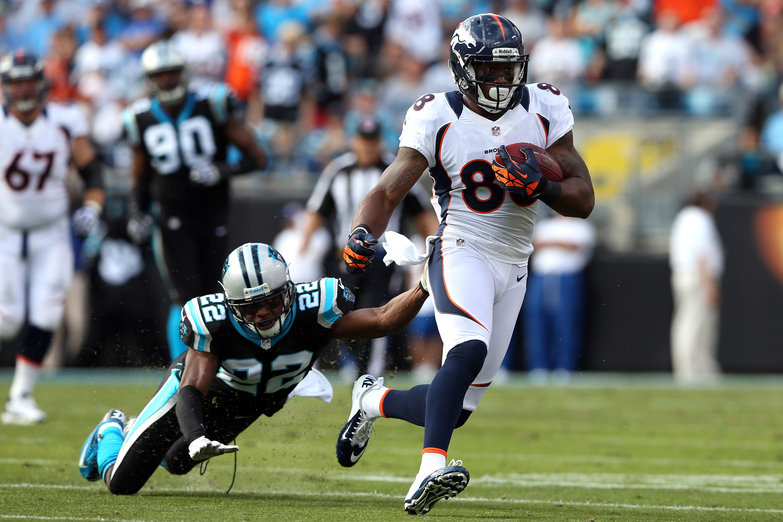 2013 draft pick Tavarres King figures to be a lock to make the roster, as well as returner extraordinaire Trindon Holliday. Let's assume there's one spot for a wide receiver left on the roster. Who does it go to?

Andre Caldwell is the obvious choice when it comes to experience, but he was less than impressive last year when given the opportunity. An up-and-comer is Greg Orton, who spent 2012 on Denver's practice squad and has been having strong OTAs and minicamp reports. He is still practice squad eligible though, so the Broncos may choose to stash him there again.

Gerell Robinson is a guy I liked at camp last year; I was suprised he did not land on Denver's practice squad. Instead he spent the season on Arizona's practice squad, but is now back with the Broncos. A college teammate of Broncos backup QB Brock Osweiler, it wouldn't surprise me to see Robinson elevate himself to that final WR spot (or Denver's PS as Orton ascends to the roster).

Finally, there is a slew of undrafted rookies looking to leave their mark.

The drop-off from third receiver to fourth may be steep, but the number and variety of players shows that the backup pool is deep. But between Demaryius Thomas, Eric Decker, and Wes Welker, the 2013 Denver Broncos should have all the fire power they will need.