The Broncos added a veteran player to their safety mix. The catch? He's a cornerback. Did they improve in 2013?

Share All sharing options for: Did the Denver Broncos improve? Safety edition

The players are mostly the same. You can't really quantify how the Broncos got any better in 2013 except by two important factors: age and experience. And two guys, Rahim Moore and David Bruton, look to benefit the most from those elements.

Rahim Moore's sophomore season was sensational in 2012. The 2011 second round draft pick barely resembled the indecisive, poor-decision maker he was in his rookie year. Yet all of that good was washed away in one instant in one play in January as far as the fans are concerned. We won't let that erase his comeuppance completely. Moore's work ethic is second to none, and I expect an even better season from him in 2013. 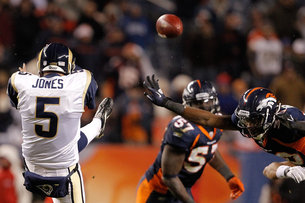 MHR gets you ready for Broncos training camp!

David Bruton, as expertly scouted by our own Topher Doll, has the potential to push Rahim Moore at starting free safety. That's against the grain of what is commonly thought of the speedy and strong Bruton, who many see fitting a strong safety role. His handicap in one-on-one man coverage, though, combined with his ability to recover in zone play, have us leaning toward the free safety position. A special teams staple, he'll push Moore for the starting FS spot in camp.

We expect Mike Adams and Quentin Jammer to hash things out at strong safety, where Adams had a career year and Jammer is attempting to return to his college position for the first time in a decade.

The wild card in our book is Quinton Carter, whose 2012 season was lost to a knee injury. He played at both strong and free safety as a rookie, and if he can return in the form of a third-year player, knee injury be damned, he could definitely push for time.

The Broncos have solid depth at the position, although the starters aren't stellar. Still, with Bruton looking good in OTAs and minicamp, Moore on a determined path, and the addition of Jammer as Bronco Mike's patented potential "TE Killer", the Denver Broncos improved at safety in the 2013 offseason.

Now let's see those improvements play out in the regular season and, more importantly, the postseason.