A workhorse, a mustang, and a fugazi walk into a bar...

If you had to guess in that order who I was speaking of amongst Broncos RB's who would you say is who MHR?

Share All sharing options for: A workhorse, a mustang, and a fugazi walk into a bar...

The workhorse is Montee Ball, the mustang is Ronnie Hillman, and the fugazi is Knowshon Moreno. Not sure what a fugazi is?

If you've been a Bronco fan for any length of time right now, you should know better when it comes to Knowshon Moreno. Stepping in for Willis McGahee last season, everyone was impressed that he actually looked like a decent running back--including yours truly. He's a jack of all trades--one of McDaniels infamous "versatile" players. He does just enough in several aspects of the game that make his overall game look better than it actually is. A fugazi. Now, I'm not quick to write off any Broncos player but I've seen enough to know that while Moreno can provide decent depth who can step in and look the part if someone goes down--he's not the guy you want handling the workload.

Want to know why I know that about Knowshon? Look no further than Divisional Weekend against the Ravens. Injured....again. Guy is as fragile as an aluminum can. Can't be trusted. His injury history is no fluke, it is now a regular occurrence. For whatever reason, he can't stay healthy. After that unfortunate injury in the 3rd Q, the Broncos were left to pass protect with Lance Ball, who nobody in Broncos Country is very fond of, and rookie mustang Ronnie Hillman. Protection went downhill--In fact here's the proof and a screen grab of data from Scott Kacsmar's excellent article on that playoff debacle:

9 pressures in the 2nd half after Moreno went out. I don't know about you, but I don't want a major component of a do or die game to depend on whether or not Knowshon can stay upright and healthy.

Moving on to the Mustang.

The Mustang has been cruising in 3rd gear. He hasn't found the room to pop the clutch once more and let her loose. He's been close a couple times but that homerun threat he was supposed to provide didn't exactly come to pass last season. A few months later and Hillman has supposedly put on some weight in his upper body to help his strength out a bit.

We've been fed an illusion at times this offseason that Hillman can possibly step up and be the man. If this were true, I don't know if the Broncos draft their workhorse Montee Ball in the 2nd round. He isn't exactly just a 3rd down back either. I believe he can shoulder the workload, but in spurts. You won't see him get 20-30 carries a game, but he's capable of taking a series or two and giving the workhorse a breather.

Montee Ball. Measures up to Terrell Davis in many ways, Elway and co. even compared his combine numbers to TD during the scouting process. Montee is a ball carrier that doesn't wow or impress you with flashy moves or top end speed. What he gives you is that car you know will start in the morning and get you to work no matter if it's hot, cold, snowing, whatever. He's that pickup you can load huge boulders and scrap metal at the job site and be assured it will transport your mess from point A to point B. 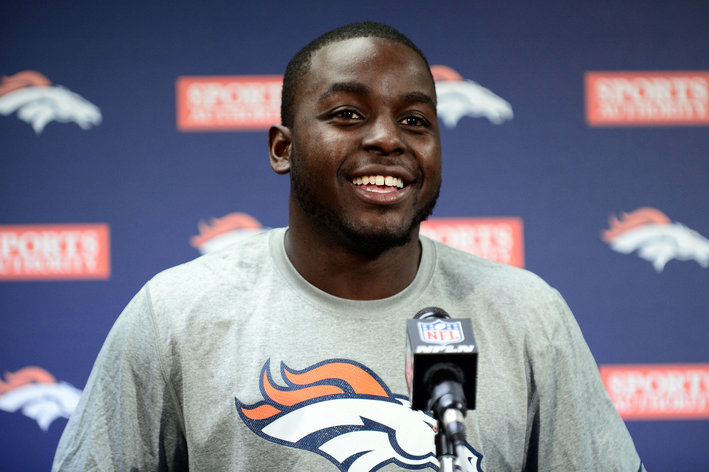 Montee is that back that thrives with superior vision and footwork. He will identify that hole and accelerate through it on a dime. He may have trouble busting one or out running some speed in the secondary, but he will also give you someone that can grind out that extra yard or 2 on the inside when not much is there. Good Ball is a steady receiver with reliable hands, someone that has no problem identifying blitz pickups and then following through on the block. He's played with a QB in Russell Wilson who was given the ability to audible in and out at the LOS so his learning curve in picking up Manning's nuances isn't as great as other backs on the roster.

Much has been made of his workload in college. But for every naysayer that pops up and screams "tread on his tires is great" at the top of their lungs forgets about guys like LaDainian Tomlinson, Steven Jackson, Ricky Williams, and Ray Rice that also shouldered heavy loads as Jrs/Srs and went on to have long and productive careers in the NFL. In fact let's do some comparisons:

(carries are as a Jr. and Sr. in college, and yards are pro numbers)

Montee is built for the workload. His vision and low center of gravity as a runner kept him relatively unscathed as a college runner--he doesn't take big hits.

If you wanted me to handicap how I think a typical regular season game will go as far as the RB position, I would like to see Montee get 15-25 carries per game, Hillman 10-15, and Knowshon pick up some snaps in garbage time.

I think between the three of them they could easily give the Broncos running game 30-35 rushing snaps per game which will also keep that arm of Peyton Manning's fresh throughout the season. Not much has been made of Manning's arm in the offseason other than to say it has gotten a bit stronger. With a super bowl run however, you have to count on playing 19 or 20 games depending on if your team earns a playoff bye. The goal is to make it to NY, a potential cold and weather affected Super Bowl site with Manning's arm as fresh as possible.

Time for the Broncos running game to step it up and take some of the burden off the old man;)

Out of the workhorse, the mustang, and the fugazi MHR, who do you think will have the greatest impact in 2013?