Chris Kuper says he'd be willing to switch to center

With Denver's depth at center decimated by injuries, a former Pro Bowl guard says he could step into that role - when healthy.

Share All sharing options for: Chris Kuper says he'd be willing to switch to center

A position switch is no minor task, even along the offensive line. But that's exactly what the Broncos have asked Manny Ramirez to do this offseason: make the switch from guard to center.

Could they ask another player to do the same?

Chris Kuper has often been talked about in that role, and today the injured right guard confirmed to ESPN that he would consider such a move.

Per @TomNalen, Chris Kuper is willing to give C a try once he gets healthy. #BroncosCamp

We talked about Kuper's potential at center a month ago when J.D. Walton underwent another surgery. It intrigued us then, and it intrigues us now - to a degree. 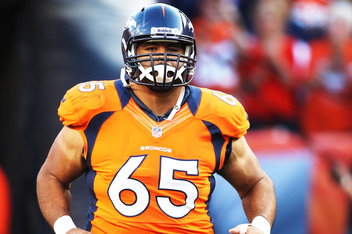 Looking at several of the Broncos' options at center.

"We will consider anything that is going to better our team," head coach John Fox said after practice today when asked about moving Kuper to center. "Right now we are trying to get him healthy. We will pretty much cross that bridge when we get there."

But here's the big catch: Kuper is on the team's Physically Unable to Perform (PUP) list, and it isn't clear when he would be ready. What is clear that he would need a lot of practice, a lot of snaps, and a lot of time to fully make the transition from guard to center.

And with opening day 38 days away and Kuper still sidelined, a lot of time isn't something the Broncos have.