Billy Thompson is perhaps the greatest defensive back in Broncos History.

I got to meet Billy once--years ago. It was 1997 right after the 1st super bowl win. I was a Junior High student at Skinner Middle School. One afternoon, word spread that the Lombardi Trophy would be there and we would have a chance to see it and take a picture with it. This was pretty exciting stuff for a young Bronco fan. You mean I would actually have the chance to touch the same trophy John Elway had triumphantly hoisted just a couple of months ago?

The Denver Broncos, part of the wonderful ownership of Pat Bowlen, wanted to share the victory with the community and part of that outreach was to take the trophy on a Denver-area tour of local DPS schools. Everyday it went to a different school for other young fans. Curiously, not a lot of kids stayed afterschool to check it out. Me and a few buddies of mine were virtually the only ones there. That also meant we could take our time and have a long moment in the sun so to speak.

It was near the end of school because we all had our yearbooks at that time. Anyway I remember going up to the trophy and the man who was acting as the curator was a tall gentleman (he's only 6'1" but to a middle school kid he looked pretty big) dressed in a nice suit. I stood behind the table they had set up and took a picture with the Lombardi. 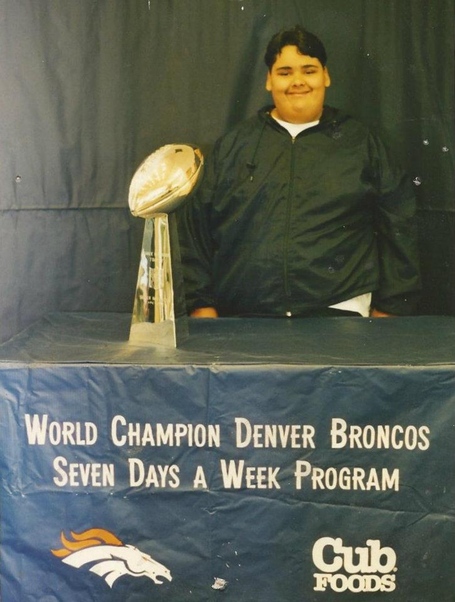 As I was standing there looking at it, I badly wanted to grab a hold of it and hoist it above my head. I was still a little timid and intimidated by everything so I asked the man in a nice suit "Do you mind if I touch it?" He laughed and politely said "Ok, just don't touch it too much." I'm not sure if they had rules or whatever about touching it but his response made me a little disappointed. I sensed that it wouldn't be ok for me to just grab it and hold it above my head so instead I settled for running my fingertips over the laces and the engraving on the base. After I got done, my fingers had left prints and the man in the suit removed a polishing cloth from his pocket and shined them off. I lingered a bit as he did that and I think he sensed my disappointment.

He asked me "Would you like an autograph young man?" I said "sure!" The only thing I had on me was my yearbook and I opened it up to one of the last blank pages left. He took the book and signed his name "Billy Thompson #36"

I shook his hand told him thank you. As I rode back home in the car with my pops, I looked at the autograph, still disappointed and thought in my mind "Billy Thompson, never heard of him. Probably just some old scrub that played years ago"

Ah the ignorance of youth. If I knew what I do now, I would have been just as excited to meet an all time great as I was to hoist the Lombardi.

Billy Thompson accomplished many great things as a Bronco. Kaptain Kirk wrote up a hell of a piece about him a couple of months ago and I'll take a portion of that piece and put it here:

Billy's pro career began when the Broncos selected him in the 3rd round (61st overall) of the 1969 NFL Draft. He started as a Cornerback, but in 1972, Defensive Coordinator Joe Collier shifted put him at Safety to take advantage of Thompson's overall talent.

"Joe told me I'd be more valuable at Safety. He always put me where he thought the action would be and I learned more about the game because of that."

Billy Thompson was by definition, a "Ball Hawk." He is one of only two players in the history of the NFL to return 4 Fumbles for Touchdowns. He also finished his career with 61 Turnovers, (most in team history) including 40 Interceptions (3rd in team history).

He also had 21 Fumble Recoveries and with his 3 "pick sixes," gave him 7 career Defensive Touchdowns. Probably the most memorable Fumble Recovery Thompson made came on the first Monday Night Football game in Denver Broncos history. On October 22, 1973, archrival Oakland Raiders had dominated the Broncos for more than 10 years. Billy returned a Fumble 80 yards for the Broncos 1st Touchdown and Denver escaped with a 23-23 tie. This got Al Davis, longtime owner of the Oakland Raiders to say that,

"Bill Thompson was as good a Strong Safety as anyone who's ever played the game."