We kick off our 2013 Denver Broncos training camp preview series with a look at Denver's versatile tight end group.

While the Denver Broncos haven't made any large moves at the tight end position since 2012, an interesting training camp position battle is brewing anyway.

Joel Dreessen, Denver's #2 #1B tight end in 2012, was knocked out of OTAs and minicamp with arthroscopic knee surgery this offseason, which gave Julius Thomas a chance. Thomas made the most of that chance, emerging as a pass-catching threat during team workouts and reportedly having some of the best practices of his career.

Dreessen is expected back in time for camp, but if Thomas can continue the pace he set in OTAs and minicamp, he'll be pushing for Dreessen's roster spot. If Thomas, who was drafted by the Broncos in the fourth round of the 2011 draft, can finally live up to his draft billing, it opens the door for the Broncos to offload one of their tight ends in a trade, should they so choose.

Jacob Tamme enters his second year with the Denver Broncos after successfully re-establishing his Peyton Manning connection in 2012. With both Manning and Tamme new to the Broncos, Tamme put in a solid year - the second best of his career - hauling in 52 receptions for 555 yards and two touchdowns.

Tamme only started eight games for the Broncos - most of the starting snaps went to Dreessen, thanks to his larger use in blocking schemes - but make no mistake, Tamme is the Broncos' "Number One" tight end.

Camp outlook: Tamme won't have trouble earning a spot on the 53-man roster. Unless someone like Thomas emerges beyond expectations, he'll be Denver's Number One, Week One. 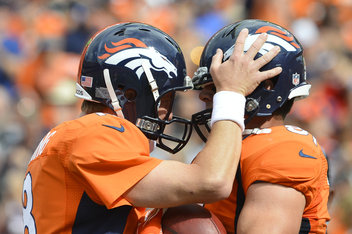 Joel Dreessen was another Broncos newcomer in 2012; he and Tamme successfully provided the one-two punch the Broncos were hoping to get from the free agent duo last season. Dreessen started in all but one game for the Broncos last year and had a career-high 41 receptions, but his role was that of the blocking tight end. Dreessen's 8.7 yard average - the lowest in his career since 2008 - is evidence of that role.

Camp outlook: Dreessen is coming off arthroscopic knee surgery; at camp he'll be defending his position on the depth chart against the rise of younger guys like Julius Thomas and Virgil Green, and needs to have a strong camp to keep them at bay. Still, his versatility as a blocker and special teamer (he's Denver's emergency long snapper) gives him a strong edge to make this roster. It will take a combination of factors to see Dreessen's role diminish.

In two years in the NFL and with the Broncos, Virgil Green has shown that he is a formidable asset for the Broncos as a blocker in two tight end formations. At the end of last season, Green's role and number of snaps increased as he stole snaps away from Tamme and, at times, Dreessen to seal Denver's edge in the run-the-clock-out fourth quarter running game.

Green has only hauled in eight career receptions, reiterating his role as a blocker, but he did have a three-catch, 44-yard game against the New Orleans Saints last year. Maybe Green can step up in a pinch.

Camp outlook: Barring something unforeseen, Green is too valuable as a blocker and special teamer not to make this team.

Despite this being his third year in the league, Julius Thomas just participated in his first minicamp in 2013. Between the 2011 lockout and 2012 ankle surgery, Thomas has never before participated in team activities in the offseason. Seeing him succeed at those activities in 2013 was refreshing; Thomas is a physical specimen, and if he can translate his success in shorts to success in pads at camp, he'll push another tight end for snaps. Thomas was deactivated for much of 2012 and 2011.

Camp outlook: Is this the last chance for Julius Thomas? Probably not; he's a third-year player, relatively cheap, with another year left on his contract for 2014. But with Joel Dreessen on the mend, it might be his last best chance.

Lucas Reed is an undrafted rookie out of New Mexico, finishing his Lobos career tied for the school record in receptions with 77. Entering 2012, he was poised to smash that record, but a change in offense saw Reed take on more of a blocking role, and he only had five receptions last season.

(Five receptions doesn't sound so bad when New Mexico's freshman starting quarterback had 13 completions in all.)

"We went to the triple option," Reed explained to the Denver Post during offseason workouts. "I got to learn how to block better. Draft-wise, it probably didn't help, but becoming a better player, yeah, it helped."

Camp outlook: Reed's story is an intriguing one, but his battle is still an uphill one, given the talent and experience around him. His best bet on converting his invitation to Broncos camp into an NFL career is to land on Denver's practice squad this year.