Did the Denver Broncos improve in 2013? Inside linebacker edition

We continue our series comparing 2013 and 2012 with a look at one of the most fluid positions on the roster, inside linebacker.

Share All sharing options for: Did the Denver Broncos improve in 2013? Inside linebacker edition

There really isn't any way to know whether the Broncos improved at any position until they play on the football field, but that's especially true of this position. The Denver Broncos are leaning on the potential of their young inside linebacker trio, rather than the production and experience they leaned on last year in Keith Brooking.

It's like walking into a hotel room for the first time in the dark. You hope it's nice; it looked nice in the pictures and the YouTubes, but you really don't know until you turn on the light. In person.

The Broncos are turning on the light on Nate Irving this training camp, their 2011 third round draft pick, and giving him plenty of motivation to succeed. Irving has first crack at the starting middle linebacker job, with a complement of Steven Johnson and Stewart Bradley providing competition. Can Irving take the heat? 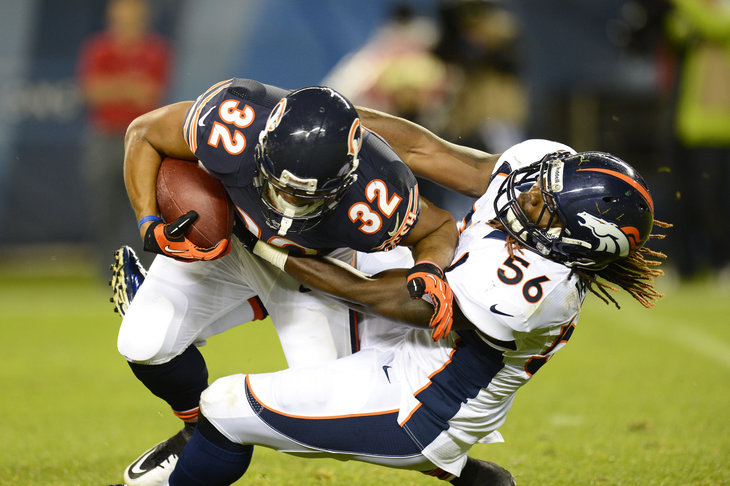 "Nate’s doing a good job," defensive coordinator Jack Del Rio said after OTAs. "He wants to take full advantage of the opportunity he’s getting to get reps inside. We've spoken about some of the things that we need to see from him and he’s working hard to give that to us. He’s a bright guy, and he’s got a big opportunity in front of him and I think he’s trying to make the most of it."

Irving has had his moments, especially in the 2012 preseason - some fans were even disappointed to see the Broncos sign Keith Brooking late last offseason, hoping instead for Irving to ascend. In 2012, the Broncos determined he wasn't ready. In 2013, they're hoping he is.

Their backup plan is solid though. Steven Johnson is a tenacious special teams tackler with big upside, and Stewart Bradley is a journeyman who proved in one season he is capable of playing middle linebacker as good as anybody in the NFL. You can easily make the case for one of these guys to push Irving.

Still, unproven starters and solid backup plans do not make a better depth chart than a proven veteran. Not for one season. Not in the month of July, on paper.

Don't get me wrong: I love the Broncos' plan here, letting their young guys prove that the investment the Broncos made in them was worth it. I just can't call it an improvement over 2012's stop-gap solution until I see it with my own eyes.

Not until the Broncos turn on the light.