Getting beaten 40-10 is never a good feeling, preseason aside. Still, the Broncos' struggles in the 1st half are tied to one thing: turnovers. The Broncos held an edge in every statistical category at halftime, including passing yards, rushing yards, and time of possession (18 something to 11 something margin). The offense was dominant and moved the ball, but shot itself in the foot. The biggest takeaways from Saturday's game: no more takeaways, and the RB and MLB positions still leave something to be desired.

Say Von Miller has to serve a suspension to begin the year and Nate Irving starts as the SAM. Bradley starting at the MIKE is a downright liability. Watching the game initially, I picked on Rahim Moore a bit in coverage but on a couple of occasions--after watching the plays again, it was terrible recognition in coverage by Stewart Bradley that led to Rahim having to mop up his mistakes. 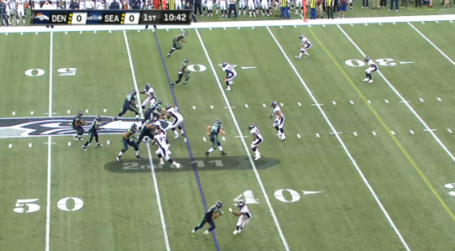 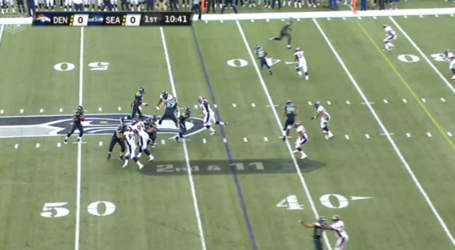 I don't see anything do you? 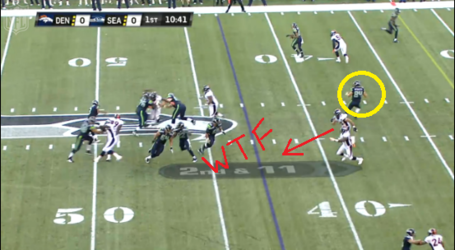 Rahim on the backside comes up and makes the stop but not before a first down.

Bradley is terrible. This is the 2nd week in a row he's been victimized in coverage. The Broncos cannot afford this sort of play in the middle. If they are considering running with their nickel D as the base, I think that would be best. Bradley isn't impactful enough against the run to justify him being on the field for extended periods of time.

I'm calling it now, this guy will be benched (hopefully) after a couple of regular season games, you know, only after he's cost the Broncos D some big plays smh.

This is from my write up on Hillman being the 20th most important Bronco in 2013:

The general feeling I have is this player can be any of the running backs. I went with Hillman because he's the starter right now. Whoever the guy is they have to be consistent. We don't need great production just consistent production. Can they consistently gain yardage on 1st down and make 2nd down more manageable? Can they pick up tough yards when not much is there? Can they pick up a blitz and keep Manning off his back? Can they be flexed out at WR and provide another viable option for Peyton Manning to throw to, can they be trusted to turn a checkdown into a firstdown when the coverage is good on the outside? Ronnie Hillman, step right up!

Hillman is not a feature back. He's not capable of carrying the load. The Broncos STUBBORNLY continue to use the guy inside and at the goalline. Look, I haven't been thrilled with Montee Ball to this point but let's call a spade a spade. You don't see other teams using their scatback as the main guy. This is stupidity on the Broncos part and I can't help to think some sort of veteran bias that plagues John Fox's thinking. You just drafted the guy who made his college bones on punching the ball into the endzone.....who made his bones on not fumbling. So what do you do on the goalline? Leave the 200 lb scatback with a fumbling history and small hands to try and punch it into the endzone. I do not want to see this guy toting the rock inside the 10 ever. You want to use him as a receiver? Great! You want to use him in the screen game and get him into space? Great! You want to pitch it to the outside and run him on the stretch play/outside zone? Great! DO NOT count on him to pick up tough yardage. He can't do it. PERIOD.

BTW, what's the point of having Jacob Hester if you don't use him near the goalline? Stupid, stupid, stupid, preseason aside. You know what absolves the Broncos in my mind? If I don't see Hillman in these situations for the rest of the year. Perhaps they were trying to see if he could get it done, he can't. No time to massage egos here we're after a championship.

I will continue to bash my head against the wall until someone listens (Peyton Manning). I will never be as smart as Manning or understand the game on that level. Not the point. I have no idea why the dude continually checks into a running play with 4 or more yards to convert on 3rd down. Box count be damned. Don't do it! He converts through the air historically around 70% (at least in the last 5-6 years). Do not check into the run especially with a scatback that has yet to consistently produce a 4.0 YPC average. This is so simple I am at a loss as to why such a mastermind like Manning continues to do it. It is going to cost us points plain and simple.

Manny Ramirez looked more like a passable center. The only glaring mistake I saw was him failing to pickup a delayed blitz.

Vinston Painter is absolutely terrible. If he wasn't practice squad bound before last night, he is now. I don't want to see another argument from anyone here on MHR as to why the Broncos should waste an active roster spot on him. If he had to play for some reason, he'd get somebody killed. He has no ability against a speed rush and from what I can tell can't even be relied upon to line up correctly.

Not sure why Mitch Unrein started at DT along with Sly, but that pairing on base downs is a mistake. The middle was pushed around consistently. Mitch is a good DT in nickel situations, keep him there.

A week after tearing it up Duke Ihenacho was virtually invisible, giving up a TD at the end of the half after being a split second late on a play to the ball. Keep working kid!

Wes Welker in a Bronco uniform is a beautiful sight!