Broncos at Seahawks: Preseason play is meaningless, until injuries come into play

Don't pay attention to the final score, look at the injury report. An update on injured Broncos Wolfe, Vasquez, Bailey, and Welker.

Share All sharing options for: Broncos at Seahawks: Preseason play is meaningless, until injuries come into play

It's preseason. The score doesn't matter, and the game can be easily forgotten after it ends...usually.

Until injuries come into play.

That was the case Saturday, as the Broncos' preseason matchup against Seattle was one that stung more than any preseason game in recent memory. It wasn't the 40-10 final score that hurt; many key players suffered injuries in Denver's "meaningless" preseason match Saturday.

The first and most gruesome of injuries happened early in the first quarter when DE Derek Wolfe was motionless on the turf. During a Seahawks run play Wolfe was hit in the head/neck area and did not get up after the hit.

Medical personnel surrounded him and the usually rocking stadium went silent. Wolfe was carted off the field, put straight into an ambulance and was taken to the hospital. It was a very scary moment for both teams and all viewers to witness.

It later came out that Wolfe was being evaluated for a cervical spine injury (yuck- that just sounds bad.) Luckily, all of Wolfe's tests results showed good signs according to Head Coach John Fox. Wolfe has movement in all of his limbs and was even able to travel home with the team.

Thanks for the prayers everyone, ill be okay and will be back on the field soon #broncosup

There is currently no timetable for how long Wolfe will be out, but it is safe to say everyone breathed a sigh of relief that Wolfe's injury was not life altering.

Although he will be okay in the end, the injury to Wolfe is still a blow to the Broncos defensive line. The Broncos offensive line also had a scare (though much less scary) during the preseason battle against Seattle.

Recently acquired OG Louis Vasquez came out of the game last night with a left knee injury. If there is one concern that Broncos fans have had during this off-season, it's the offensive line. A strong and consistent offensive line is key to winning in the NFL and with a QB as precious and valuable as Peyton Manning, the offensive line is that much more important.

When Broncos C Dan Koppen suffered a season ending injury in training camp, it was not good news. With Vasquez suffering an injury last night as well, it definitely hurt Broncos Country. Luckily, it appears his injury is not serious.

Hopefully Vasquez will be ready for the NFL regular season opener. 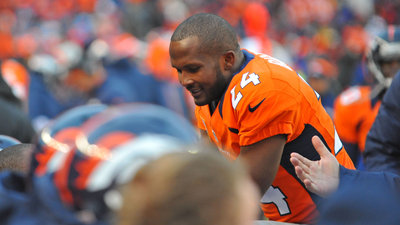 Unfortunately, the injuries suffered in Seattle don't stop there. CB Champ Bailey suffered a foot injury and left the Broncos game in crutches.

Crutches? That is never a good word to hear in relation to football.

The severity of Bailey's injury is also not known at this time, and it is safe to say all of Broncos Country is holding their breath about this one. The secondary needs him, and losing him would be a huge blow.

Finally, I can get to the last injury suffered against the Seahawks: Wes Welker. Even putting that name next to the word injury hurts. Welker was the Broncos' greatest acquisition this offseason and looked phenomenal with Manning last night.

After a beautiful touchdown run off of a pass from Manning, Welker took a hard hit from the Seahawks' Brandon Browner. It was later reported that Welker suffered something of a sprain injury to his ankle.

At this time, there is no solid report on the severity of Welker's injury.

Welker being hurt for the opener vs. the Ravens would be a huge blow. Broncos country is definitely holding their breath on this one. Let's pray that he is out there Week 1.

After listing all of these injuries, it is apparent that the Broncos took a serious beating in this otherwise meaningless match against Seattle.

On the bright side, Manning looked nearly flawless, going 11/16, 163 yds, and 1 TD. WR Demaryius Thomas and TE Julius Thomas also made some beautiful catches in this game that definitely shined some light on the Broncos' otherwise dismal night.

Injuries always hurt, but when a player goes down in preseason it hurts so much more. After all, these players went down in a game that, in the end, means nothing.

Let's just keep the rest of this team healthy from this point forward and have them ready for the Ravens, okay John Fox?

Editor's note: This is a guest piece by Courtney Hnasko, her first on Mile High Report. Please give her a big MHR welcome and let her know your thoughts in the comments!