It is uncertain if Denver Broncos cornerback Champ Bailey will recover in time for the regular season opener in three weeks. 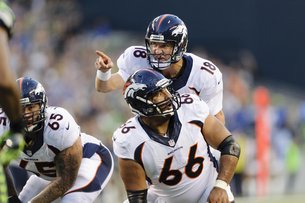 The Denver Broncos dodged another bullet Saturday when MRI results on cornerback Champ Bailey's foot came back negative, Lindsay Jones of USA Today reports. Bailey injured his left foot some time during the Broncos' 40-10 loss to the Seahawks Saturday, and was seen in a boot and crutches after the game.

However, that bullet grazed the 12-time Pro Bowler, and he may still be out for some time.

According to the NFL Media's Ian Rapoport, Bailey has a "serious sprain" on his foot, and will be week-to-week. The Broncos are hopeful he will recover in time for the regular season, but there is no telling how fast he will heal at this point.

Among all the injuries the Broncos experienced last night, the least-reported and known about might end up being the most serious. Get well soon, Champ.