A pair of Denver Broncos defensive backs are featured in EA Sports' All-25 Team.

This year's edition of EA Sports' wildly popular Madden NFL video game franchise is the 25th installment of the game, hence "Madden 25". To commemorate their 25 years of success, EA's development crew picked the best video game players at the height of their virtual careers and placed them on the All-25 Team.
One current and one former Denver Bronco made the list, both on defense. Cornerback Champ Bailey made the team with his 2005 ratings and safety Brian Dawkins made the cut from his playing days in the late 1990s.

Across from Bailey at corner is Deion Sanders.

"Corners that can shut down their side of the field are at a premium in Madden. And in Madden NFL 2005, Champ Bailey was one of the most unbeatable corners in video game history," EA Sports says on their All-25 site. 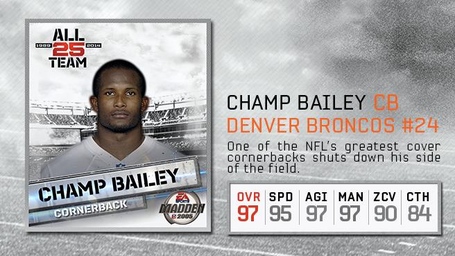 Behind Bailey in the secondary is Dawkins, who made the team based on his time with the Philadelphia Eagles, but after watching the Wolverine play in the Mile High City for the final three seasons of his career, we like to claim him as our own.

"Dawkins possessed hit power that made it look like he was shot out of a cannon. Aside from his ruthless tackling ability, he also had a good eye for the ball if thrown his direction. Dawkins gave WRs and TEs second thoughts about going over the middle," Brian Parker told EA Sports.

Across from Dawkins in the back-end of the secondary is the late Sean Taylor.

On the All-25 Team, Dawkins' overall rating is a 99, the highest rating a player can reach. Dawkins was a key part of the game's 2008 intro, which highlighted just one of his many epic pre-game speeches. 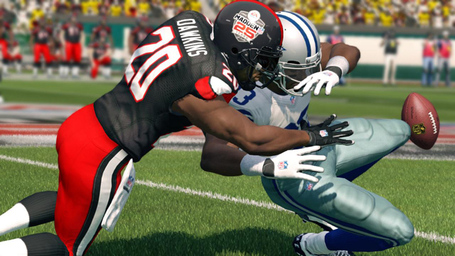