Von Miller Had "Nothing to Do" with Murder Trial, Adds Many Suspension Reports are "False"

Denver Broncos linebacker Von Miller is among dozens of potential murder trial witnesses that may be asked to testify. Miller says he had "nothing to do" with the incident and adds that false information has been reported about his pending suspension.

Share All sharing options for: Von Miller Had "Nothing to Do" with Murder Trial, Adds Many Suspension Reports are "False"

It's been a rough few days for Denver Broncos linebacker Von Miller.

Everything We Know about Von's Potential Suspension 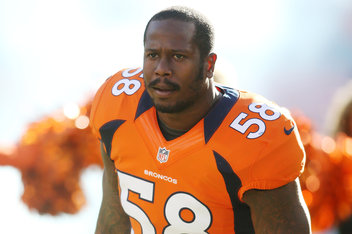 All of the details we know surrounding Miller's situation.

After news broke on Monday that Miller would likely be suspended for "at least" six games for drug test violations, 9News.com reported that Miller may be called as a witness in a murder trial for an incident that happened last year.  The latter is a non-story, as the Broncos have confirmed that Miller was not involved in the murder.

"He has no direct involvement in the case," team spokesman Patrick Smyth told Lindsay Jones of USA Today.

On Tuesday, Miller said after practice that he had nothing to do with the trial and added that many false reports have surfaced surrounding his pending suspension.

Von Miller said he has nothing to do with murder trial. Also said lots of false info being reported about suspension.

Both Miller and the Broncos are frustrated because information is being leaked before anything has even been told to the team (or Miller).

Von Miller: "I've heard the reports but I haven't heard anything from the league. That's the crazy part about it."

As of today, no appeal date has been set for Miller and it is unclear when a final decision will be made on his suspension.  Until anything becomes official, be wary of all reports—details of the situation are murky, and many facts have likely been diluted by false information.

According to NFL Network's Albert Breer, Miller's representatives and the NFL Players Association have been talking with the NFL, which could be a sign that a decision is on the way.

The NFL, NFLPA and Von Miller's people have continued talking today, working towards a resolution on his looming suspension.

Breer goes on to note that something "could" happen today, but adds the situation is fluid.

Something final could happen with Miller today. But these things are always fluid.

For now, it will be business as usual for the Broncos with Miller the starting SAM outside linebacker.  Until the Broncos hear otherwise from the NFL, Miller is free to participate in all team activities.

Von Miller suspension: Everything we know