Undrafted, unappreciated and undervalued, Denver Broncos rookie quarterback Ryan Katz is fighting to just make the practice squad unit in Denver. Undaunted, Katz is staying focused, stating that he is willing to do "whatever it takes."

Share All sharing options for: Broncos rookie QB Ryan Katz willing to do "whatever it takes" in Denver

Twenty-two year old rookie quarterback Ryan Katz played the first three years of his college career at Oregon State before transferring to San Diego State prior to his senior season. In San Diego, Katz finished off his colleiate playing days by going 99-of-163 for 1,348 yards and 13 touchdowns with four interceptions in seven healthy games, earning a preeminent 151.6 passer rating.

Katz’s performance got him noticed by NFL scouts, including those in Denver. Leading up to the draft, approximately twelve teams reached out to Katz expressing their interest in him.

Broncos draft Dysert in seventh round 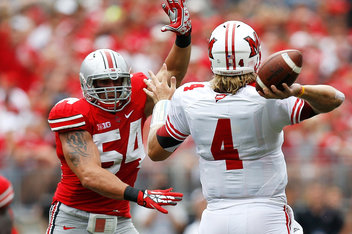 Katz was expecting to be drafted in the seventh round. The Broncos went with Dysert instead.

When draft day rolled around in April, Katz received a phone call from the Broncos in the fifth round. The team kept in contact with Katz and his agent, Mike Swenson, throughout the later rounds of the draft, hinting that they wanted him in Denver.

Then came a curveball.

The Broncos selected Miami (OH) quarterback Zac Dysert 234th overall in the seventh round, leaving Katz on the board.

"We thought they were going to draft Ryan in the seventh, but then they went with Zac," said Swenson, who added that Katz was excited to sign with the Broncos as a college free agent shortly after the draft had concluded.

I'm excited for the opportunity with the Denver Broncos. It's been a life long dream, and I'm ready to compete! #BroncoNation

Since arriving in Denver, Katz has faced an up-hill battle.

Incumbent starter Peyton Manning leads the charge in Denver, followed by Brock Osweiler and Dysert, who was deemed valuable enough by the team to use a draft selection on him. As an undrafted player, Katz is the low man on the totem pole and his offseason reps have been minimal.

The Broncos view Katz as a "camp arm," somebody brought in to handle a few extra passes and handoffs for the young receivers and running backs on the team. It’s a situation similar to the one Preston Parsons found himself in during the summer of 2008, when Wall Street Journal sportswriter Stefan Fatsis went to training camp with the Broncos as a kicker to document camp from a player’s perspective.

Just like Katz, Parsons had entered the NFL as an undrafted free agent and was competing with a seventh round pick—Bradlee Van Pelt—to win the No. 3 quarterback gig. Because the team had invested more time and money into Van Pelt, Parsons received few reps and was told to instead "soak in" reps from the sidelines.

"Every coach in the world says, ‘Go stand there and get mental reps and watch what’s going on and study the playbook," a frustrated Parsons told Fatsis in the book ‘A Few Seconds of Panic’ (pg. 154). "But there’s absolutely no substation for (real reps)," lamented Parsons (pg. 155).

Katz is in the same situation. Because the team used a draft pick—albeit only a seventh round selection—on Dysert, they are going to give him every chance to win the third spot, due in large part to what they have invested in him.

Both quarterbacks have similar year-to-year salaries (around $500,000), but Dysert received $47,200 more in guaranteed money. Fair or not, Dysert’s draft status will also play a role when cut day comes. Katz is handling the situation as well as he can, admitting that he is thirsty for more reps.

"Honestly, I’m a competitor and I want to play—that’s the reason I’m out here." - Ryan Katz

"Honestly, I’m a competitor and I want to play—that’s the reason I’m out here," Katz said after practice earlier in the week. "I just have to stay in it, that’s what coach tells me, ‘You just gotta stay in it,’ and keep learning. Even though I’m not getting that many reps, I have to stay ready because at any moment my name could be called."

Unfortunately for Katz, Dysert isn’t the only one preventing his number from being called. The Broncos view second-year quarterback Brock Osweiler (who was drafted by the team in the second round last year) as their quarterback of the future. With that being the case, they are giving Osweiler as many reps as possible, both in practice and preseason play.

"Our plan is to keep bringing Brock along and obviously Zac is the third (QB) right now," Broncos offensive coordinator Adam Gase said after practice last week. "If we can get Ryan in there we will, but nothing is guaranteed. We’d like to see Zac work a little more, but we can’t take anything away from Brock because he needs as many reps as possible."

In the first two preseason games, Katz received zero snaps while Osweiler handled the bulk of the load under center and Dysert ate up the remaining reps. Gase wouldn’t say if Katz would get any reps in the two remaining preseason contests, stating nothing’s guaranteed for the young quarterback.

"If we can get Ryan in there we will, but nothing is guaranteed." - Adam Gase

With few reps, Katz has few opportunities to prove that he deserves a spot on the team, and the Broncos haven’t disclosed how many quarterbacks they will carry on the active roster. If Denver chooses to carry three quarterbacks—Manning, Osweiler, and Dysert—Katz does have a shot of making the eight-man practice squad.

Fortunately, Katz’s career won’t automatically end if he doesn’t make the practice squad. Those twelve teams that showed interest in him leading up to the draft haven’t escaped camp without their share of injuries, and multiple teams across the league will be looking for practice squad QBs going into the regular season.

In the meantime, Katz can’t afford to worry about the future—he has to be ready for his name to be called at any moment.

Katz’s five months as a Bronco have gone by quickly, but he could land elsewhere in short-order if he does end up being cut later this month. Next week (Aug. 27), teams must trim their rosters from 90 players to 75 by 4:00 p.m. ET. Four days later (Aug. 31), teams must finalize their 53-man rosters. In the meantime, Katz can’t afford to worry about the future—he has to be ready for his name to be called at any moment.

"It’s a grind right now; it’s a lot of mental (processing) for me, just getting the playbook down and everything like that. That’s where I need to continue to grow," said a focused Katz, who at least appears to be more concerned about making the right call then worrying about how many QBs the Broncos will carry.

Hoping to see playing time in at least one of the team’s two remaining preseason games, Katz would benefit greatly from getting on game film—something his agent can send to teams after final cuts have been made and teams begin assembling their practice squads.

Katz’s best chance at playing time will come in Week 4 when the Broncos host the Arizona Cardinals at home on Thursday, Aug. 29. In the final preseason game of the year, teams give a majority of reps to rookies and first-year players fighting for roster spots—players like Ryan Katz.

It’s impossible to not root for a guy like Katz, one of the biggest underdogs on the team. His time will come—whether it’s in Denver or somewhere else, Katz’s number will be called, eventually.