Broncos vs. Rams: Five Questions with the Enemy

Questions answered by the St. Louis Rams experts over at Turf Show Times.

Share All sharing options for: Broncos vs. Rams: Five Questions with the Enemy

1. The Rams have had a hard time protecting Sam Bradford in the past, how will he hold up this year?

Well, it's certainly fair to assume things will be better. Jake Long was one of the best LTs in the game early in his career if not the best, so there's hope he can find his pre-injury form. If so, that locks down the most important spot on the Rams' line for quite some time. Veteran Scott Wells has had a full offseason to heal up; he too is a former Pro Bowler, so there's quality in the middle too. Rodger Saffold had been the Rams left tackle since being drafted out of Indiana in the 2010 NFL Draft, but he's moving over to the right side. It would have been beneficial for him to get more work in this preseason, but a dislocated shoulder in the opening game has put him behind the curve. Harvey Dahl is a capable veteran RG and there's solid depth on the interior with Alabama product Barrett Jones having been selected on day 3 in this year's draft. The only line battle is at LG, and it's probably still in the air between Shelley Smith and former 1st round pick Chris Williams. In all, the line certainly looks improved. I wouldn't discount the changes at WR and TE though in terms of his protection. He has more options that should be able to open up into space than his first couple of years, requiring less sustained protection.

The real key for Sam is sustained coaching and improved targets. Through his first three years in the league, he worked under two head coaches, three offensive coordinators and three QB coaches (including one season without one). So having his first season with some consistency at all three can't hurt. And the main headline for the Rams this offseason has been the improved targets: adding Jared Cook to bust the seam with second-year threats Chris Givens and emerging Brian Quick improving to add to rookie teammates (and former teammates) Tavon Austin and Stedman Bailey.

2. Tavon Austin was probably the most dynamic player in college last year, has he been breaking ankles at camp? 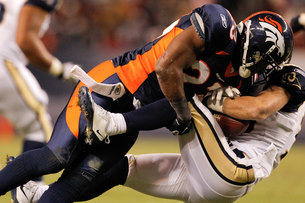 Thankfully, no...the last thing we want from Tavon in camp is additions to the injury list. Seriously though, the speed and quickness is elite. There is a bit of a question as to how the Rams are going to use him. I think it's fair to say they've underused him to this point, and it's likely intentional. I'm fine with that, as he's someone who relies on natural abilities as opposed to say a Demaryius Thomas who needed time to hone his skills to adapt. But there is an obvious risk in waiting until the regular season before testing out a key member of your offense who's also a rookie.

3. Lance Kendricks has been a fantasy sleeper for some time now, is this the year he makes good on his potential?

Probably not. He's a quality dual-threat in the blocking and control passing game, so I think the Rams' opportunity to flash him deeper in the intermediate passing game is gone. Adding Jared Cook certainly signifies the Rams weren't looking to Kendricks to be a premier pass-only threat. The reality is, from a fantasy perspective, if you're looking at the Rams for a TE, it's Cook or nothing. Personally, as much as I love the Rams, I'm staying away from TE. Shared responsibilities and all that.

4. Who are some guys for us Bronco fans to keep an eye on after the starters hit the bench?

The D-line is easily the best overall, top to bottom unit on the team. The LB depth has been pretty impressive this preseason. And there's definitely talent at RB. The truth is, the Rams are soooo young and in the second year of restocking to fit GM Les Snead's and HC Jeff Fisher's vision for the team, there's not much established depth. I think I remember seeing somewhere the Rams have more UDFAs on this year's roster than any other team. It is, to me, the biggest vulnerability for the 2013 Rams. And knowing how many teams are forced to dip and re-dip into the depth chart throughout a 16-game regular season...it's a vulnerability that is likely to be exposed.

5. What are the chances that Cortland Finnegan starts a fight?

Somewhere between 99% and 100%. Haha, no, he's going to save it up for the regular season. He's a weird guy. Off the field, he's a wonderful person. He volunteers, he spends time with challenged and disabled youths, he works with the community...he's a model citizen. Thing is, in between kickoff and final whistle, he's in the running for the biggest asshole in the NFL. It's not hard to understand -- as a 7th round pick out of Samford (not a typo), he found that he could get into his opponents head to give him an edge. Sure, it carries a reputation with opposing fans. When he was with the Titans, I certainly didn't have strong positive feelings about him. But it works. Go back to the Rams-Redskins game last year in week 2. The Rams had a 3-point lead with the Skins driving to set up a game-tying field goal. With just under a minute and a half, the Redskins just fell short of converting a 3rd down, setting up 4th & 1 from the 29. But as the mainfield squads gave way for the special team units, WR Josh Morgan and Cortland Finnegan started going at it and Morgan threw the ball at Finnegan. The refs tossed a flag on Morgan for unsportsmanlike conduct, and the Skins missed the ensuing field goal try. I'm not aware of an advanced statistic that captures a play like that, but that's the epitome of what Finnegan does. He puts people off their game before, during and after each play. Even though the Redskins had talked about Finnegan's antagonistic style midweek, it still ruined their late-game chance to force overtime. As has been said about many a goon in many a sport, he may be an asshole. But he's our asshole.

Big thanks again to Turf Show Times for taking the time to answer these questions!