We had Run DMC in music, we now have "Jump" DRC in our secondary!

He wasn't on my original rankings probably because of the unknowns. We were a great secondary without him last year, hard to place a new players' value. However had I done this ranking within the last week or so, he would have made it. If for some reason Champ Bailey has to miss Week 1, we'll be fine. No beat missed. DRC as an athlete is just that damn impressive: 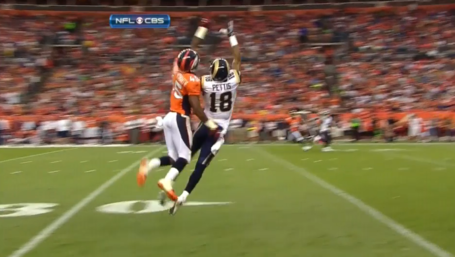 DRC looks to be the stud that he was always suppose to be. With Champ ailing, him and Chris Harris will be relied upon quite heavily, and if a few days ago is any indication of how life without Champ will go, I like our chances.

DRC is huge to the Broncos success this year. If Champ Bailey is the Champ Bailey of old, DRC will be picked on a lot. DRC is a very talented Corner. The former 1st round pick is big(6'2) fast(ran a 4.29 40 time) and can blanket opposing receivers. This is big because Champ has lost a step or two. Torrey Smith burned him deep twice in the playoffs. DRC can be our solution to that. If DRC has a solid 2013 season, look for Denver to lock him up long term this offseason and potentially replace Champ Bailey as the teams #1 cornerback.

Dominique Rodgers-Cromartie has only gotten more important as the preseason has progressed, as Champ Bailey's foot injury has him in limbo for Week One. Suddenly Denver's prized free agent wouldn't be the #2 cornerback, he'd be the #1. I'll admit I've had my doubts about DRC, but he had a very good preseason debut, and I'm excited to see if he can excel if the Broncos use him the way he is meant to be used - in man coverage.

Since the tragic death of Darrent Williams the Denver Broncos have been attempting to pair Champ Bailey up with a cornerback that was of equal or more talent. Through three head coaches and countless defensive coordinators, they have been tasked. The team has come close, but never as close as they are with Dominique Rodgers-Cromartie. All Pro wide receiver Larry Fitzgerald referred to Rodgers-Cromartie as the most athletic player in the NFL and even in the brief glimpse that Denver proved of him in week three of the preseason fans have seen that.

Many fans would argue that the secondary (predominantly Bailey and Rahim Moore) had terrible performances against the Baltimore Ravens in the 2012 divisional round, but you look at what has been replaced in that secondary and Bailey, Moore and Chris Harris are all that remain. Rodgers-Cromartie is a cover corner that will be best in must-win games (see last season, when he picked off Eli Manning and nearly forced the New York Giants out of the playoffs), he was miscast in the Philadelphia Eagles defense and looks to benefit most surrounded by the off the charts talent in the Broncos secondary.