After weeks of attending camp, watching each preseason game at least twice, and reading countless reports, I weigh in on my 53-man roster projection.

Share All sharing options for: Projecting the Broncos' 53-man roster

The Denver Broncos have to whittle down to 53 players by 4pm MT Saturday. They have one more preseason game Thursday to alter their roster course, but for the most part, they have the men in place.

Here's MHR's best guess as to who makes the Denver Broncos roster to start the 2013 season!

Two quarterbacks - I don't see Zac Dysert making the active roster, barring a remarkable game against the Cardinals. I think the Broncos will be safe to stash him on the practice squad; the roster spot is too valuable.

Neither Lance Ball nor C.J. Anderson make the roster. The Broncos will be fine with three backs and Hester as lead blocker who can still make a few plays himself. 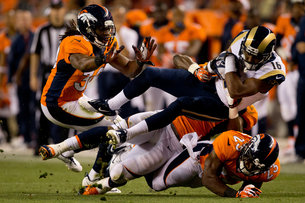 The biggest cut has already been made - Greg Orton was placed on the Injured Reserve list after he cleared waivers Tuesday.

Two guys here are on the bubble - Jacob Tamme and Virgil Green - but Tamme was just too productive and has too much of a rapport with Manning to ignore, while it's still worth seeing what Green could develop into. Julius Thomas is the big emerger out of this group though, as we know.

I'm not a fan of Chris Clark, but he's the only option right now. Until the draft pick Vinston Painter develops.

The biggest cut here is Philip Blake. Denver's fourth round draft pick from a year ago has simply not panned out. He didn't look the part in training camp, and he didn't look the part in preseason. With J.D. Walton and Dan Koppen both out with significant injuries, it should have been Blake's time to shine. Instead, the Broncos signed two centers ahead of Blake - Ryan Lilja and Steve Vallos. The reason - Blake just isn't cutting it.

Jackson and Phillips started at defensive end in Preseason Week 3, with Derek Wolfe and Robert Ayers sitting out with respective injuries. The odd man out here is Jeremy Beal. 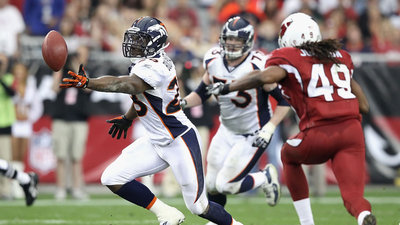 Von Miller starts the season on the Reserve/Suspended list, giving Stewart Bradley his roster spot. Otherwise I think Bradley might have been gone. This projection also gives Denver its 10th consecutive year with an undrafted rookie making the team out of camp. I think Lerentee makes it right now, but I reserve the right to revisit this projection based on how he performs during the fourth preseason game.

Mike Adams makes the team by the skin of his nose. As excited as I am about Duke Ihenacho, he's an important safety valve in case Ihenacho doesn't pan out when it really counts.

No real surprise here either... though I will say, it wouldn't shock me if the Broncos parted ways with Trindon Holliday. He has not looked right in the preseason.

What do you think of my 2013 roster projection? Give me your take in the comments.