Share All sharing options for: Eric Decker and Jessie James on the latest MHR Radio podcast

Good afternoon Broncos country! It is our sixth episode of the MHR Radio Podcast, and today we are thrilled to be bringing you our one-on-one interview with Broncos star receiver Eric Decker!

Decker was taking part in New Era Caps' Speak with your Cap promotion, and I rearranged my schedule Sunday to be there and interview Decker in person. 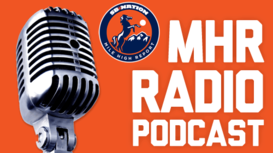 We talked about his success last season, how Wes Welker will impact the offense, how Peyton Manning looks in Year Two, and about his upcoming reality TV show starring he and his wife. His wife, country star Jessie James, also joined me for a few minutes to talk about the life of the wife of a professional football player!

Big thanks to New Era for hooking us up with the interview - follow them on twitter at @NewEraCap. And big thanks to our stars, Eric Decker (@EricDecker87) and his lovely wife Jessie James (@TheJessicaJames)! Check out their show

Topics covered today in the MHR Radio Podcast are:

We love your feedback! Let us know what you think in the comments, and stay tuned next week for our huge, grand, 2013 Season Preview!