Somehow I think this number is already retired.......but oh well, we'll go with it. Rahim "The Dream" Moore is up next!

From The Horses' Mouth

There are some questions marks at the back-end of Denver's secondary, but Rahim Moore is not among them. Second-year player Duke Ihenacho has impressed this preseason and fellow second-year defensive back Omar Bolden was also just moved to safety, but it's still relatively unknown who will be starting across from Moore this fall. Regardless, Moore showed growth in Year 2 and is poised to continue progressing entering his third season.

"That night, I couldn't sleep for nothing," Moore told reporters this offseason, and you know exactly what 'night' he was referring to. "That's just how the game is, you know what I mean? But I was right back on the plane and right back to work, I felt good, I was healthy. ... I'm not one of those guys that gets beat down." Moore's bounce-back attitude this offseason will serve him well this season. Just like he has practiced his play recognition, just like he has practiced his backpedal, just like he has practiced his tackling, Rahim Moore has practiced his ability to forget. He has a short-term memory when it comes to that terrible play from January. A season of improvement was wiped away by a moment of miscalculation, but Moore isn't dwelling on 2012, he's focused on 2013. It'll be vital to Moore's career - and vital to the 2013 Broncos season - that Moore perfects his ability to forget. And practice makes perfect.

I am not sure that most fans are aware of this, but in 2011 the Denver Broncos made Rahim Moore the first safety drafted in that years draft. Moore spent 2011 playing sparingly, as fellow rookie safety Quinton Carter took most of the snaps and exploded into the post season. In 2012 it was Moore's turn to start and he rewarded the Broncos for the opportunity by putting up numbers that placed him in the top nine of all NFL safeties in first down percentages (a PFF statistic), with only one safety having more snaps then him and allowing less first downs-- Minnesota Vikings Harrison Smith. Sure there is that play, but just weeks before Moore had done nearly the same thing and knocked the ball away from Vincent Jackson and stopped the Tampa Bay Buccaneers comeback.

Rahim Moore gets a bad rap around Denver. Everywhere I turn, people are wanting this kid's head on a plate. Why? Was he the only one at fault last year for the Broncos playoff loss? Was he even the most directly responsible?
Fact: If Matt Prater hits a 40-49 yard FG, we are up by 10 and that play doesn't even matter even if it plays out the same.
Fact: If Champ Bailey doesn't allow not 1, but 2 TDs, that play by Moore doesn't matter.
Fact: If Trindon Holliday doesn't have 2 return TDs, it's a blowout and that play doesn't matter at all, especially because it'd be Flacco taking a knee instead of Manning to end the game.
Fact: That play didn't lose anything. It was a Peyton Manning INT in overtime that lost the game. All that Moore play did was allow the Ravens to TIE the game (with 31 seconds left, 2 Timeouts, and PFM on the team.)

Do you know what Moore is? He's a 3rd year safety who improved more than any player on our team from year 1 to year 2. He owned his mistake and apologized to each and every person on the team and the fans. He stood there like a man and never backed down from any interviews even though he knew the line of questioning because he said that character will never be questioned when things are good, only when things go bad, and do you know what? He's right!

This kid has an EXTREMELY bright future ahead of him, and I'll be the damn vocal leader of his fan club if I have to! I'd rather take my lumps with a young safety who is still learning on the job. "What doesn't kill you will only make you stronger", and guess what? Moore is still standing here! He's grown since that play, and he's gotten stronger because of that play.

Before you yell at him or blame him any more, ask yourself this... Would you rather have a stud Safety in the making on our team, or booed off of it? I'd rather have him right here for the rest of his career than boo him out of town and watch him flourish with someone else! This is Big Pete, you stay classy Denver!

Nothing but respect for the kid. He faced up to the folks that dogged him all offseason, stood in front of cameras and answered every question about his mistakes, he's a stand up guy. Something like one's role in a prevent defense can be taught. I'm looking forward to both of our young safeties stepping it up to become a dynamic duo on the backside.

Painting courtesy of Artist Don Medina, check out his facebook page to see more of his fantastic work! 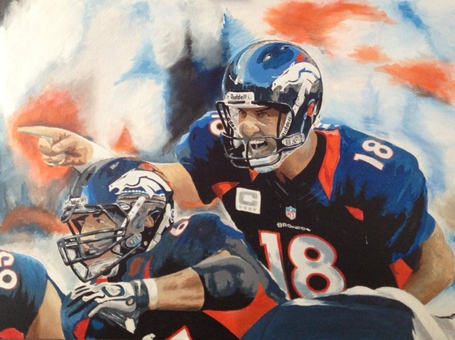