The majority of Denver's 22 roster cuts to get down to the league-mandated 53-man roster are expected today.

The final whistle has blown. The time to show it on the field is over.

Now the film room will tell the tale.

"We’ll look at the tape and evaluate it, and make some very hard decisions," John Fox said after the Broncos' final preseason game Thursday night. 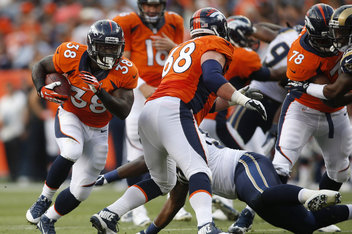 Those hard decisions loom because the Broncos, like every NFL team, must finalize their 53-man roster by 4:00 p.m. Denver time Saturday. With the Broncos holding a workout Saturday, and with their roster currently sitting 75 players strong, that means the vast majority of those 22 cuts could be coming Friday.

"Yea. Last week was no fun," said Fox of the first 13 roster moves the team made to get down to 75 players. "I think everybody has either had to fire somebody or been fired. It’s never fun on either side of that. You get close to these guys through the offseason conditioning, the OTAs, the minicamps, and four preseason games. It’s never easy."

The task was hard enough before Denver's preseason finale against Arizona, but a handful of players giving strong performances Thursday make it even harder.

But it's not enough to say, "That player played well, let's keep him." The Broncos have to find someone on their roster who loses a spot to make room.

And there is no shortage of talent and deserving players on this team.

It's the type of problem you want to have as a team competing for a championship - too many good players. But it is a problem nonetheless. Finding a balance between building a roster for this season and making sure you keep talent in-house for the future is a delicate art in any given season; for the 2013 Broncos, it's almost impossible to justify a precious roster spot to someone based solely on potential.

"We're going to try to pick the 53 best guys that we think can help win us a championship." John Fox

That is why, for a player like quarterback Zac Dysert, who had an impressive night with 163 yards passing, a touchdown, no interceptions, and a 90.2 rating, Thursday's preseason performance may not be enough. The Broncos would love to safely stash him on their practice squad without fear of another team picking him up off the waiver wire, but how can you realistically expect a team like the Bills or Jets or even the Cardinals not to jump at a chance at a guy who outperformed some of their starters?

"I tried to use tonight to my advantage," Dysert said after the game. "I tried to make the most of the opportunity and just prove myself to them that I can play."

One wonders exactly who Dysert was trying to impress. The Denver Broncos? Anyone in the NFL? 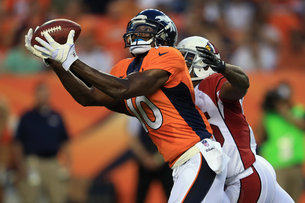 Another player, Gerell Robinson, likely did enough to earn a roster spot Thursday night. It wasn't just his game-high 99 yards receiving that has to have the Broncos' attention - it was the way he caught them. Robinson made tough catches in tight space; he looked good running deep behind the defense for a 45-yard haul from Brock Osweiler; he adjusted nicely to Zac Dysert's ball in the end zone in the third quarter for a touchdown. Add to that an impressive night of blocking - he was one of the downfield blockers on Ronnie Hillman's first impressive run, and he laid a crucial block in Lance Ball's 69-yard screen rumble - and the Broncos have to see a potential future for Robinson in Denver.

"Even if I feel like (I’ve done enough) it doesn’t matter what I think," Robinson told the Denver Post. "It ultimately comes down to what the heads at the top of the team think and what God has planned for me. I've been down this road before."

The problem is, the Broncos don't necessarily need Robinson for this year. They have Demaryius Thomas, Eric Decker, Wes Welker, and Andre Caldwell locked into roster spots. Tavarres King was a drafted rookie this season, so he very likely has a roster spot.

Do you carry a sixth wide receiver, solely for the future? Do you let a talented kid go because he won't make an impact on your team this year?

"We're going to try to pick the 53 best guys that we think can help win us a championship," Fox said. "That's never been much different and won’t be moving forward."

These are the very hard decisions that John Fox faces this Friday morning. I don't envy his position.

Broncos vs. Cardinals preseason 2013: Everything we know