CJ Anderson has the honor of carrying out a very prestigious Broncos tradition: Making the final 53 man roster after joining the squad as a long shot.

It is astounding that 4 people on this list are currently with the team as a starter (Wesley Woodyard, Chris Harris Jr. Aaron Brewer), or as a valuable role player (Tony Carter).

Of course there is the greatest UDFA rookie in Broncos History, a man by the name of Rod Smith.  Rod parlayed his opportunity into a storybook career that includes 3 pro bowl appearances, 2 all pro nominations, 2 world championships, 849 receptions for 11,389 yards and 68 TD's.  All of those stats are NFL records for an UDFA WR. 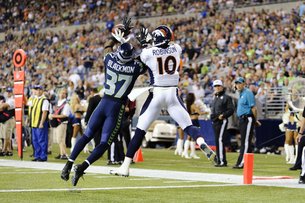 Keep track of all of Denver's roster cuts here

On our team now, Wesley Woodyard is in a contract year after becoming a playmaker and one of only three defenders since 1980 to record at least 100 tackles, 5 sacks, and 3 interceptions in a single season.  Depending on his transition to MLB, Woodyard is on the precipice of stardom.

Chris Harris Jr. is already there.  Finally recognized for his spectacular shutdown abilities in the slot, Chris Harris Jr. has made himself into one of the most valuable players on the Broncos roster.  Nobody in the league covers the slot like him.  It's only a matter of time before he becomes one of the greatest Broncos defensive backs in team history.

Though Duke Ihenacho didn't initially make the final 53-man roster last year, he has gone from UDFA to starting safety in our Broncos secondary.

What path will C.J. Anderson take?

Time will tell.  You never want to react one way or another to one preseason performance.  But from what I saw in his effort against the Niners, CJ has all the talent in the world in order to succeed.  He was decisive, powerful, quick, and explosive in limited game action.  Out of all the backs that game, he definitely ran the toughest and caught the attention of Fox and company.

He showed so much potential that the Broncos didn't want to risk exposing him to the waiver wire in order to put him on the practice squad.

The path he take is up to him.  Right now his spot on the team is an opportunity--nothing more, nothing less.