Share All sharing options for: Broncos Release Their 1st Depth Chart of 2013

Today the Broncos released their first depth chart of the 2013 season, let's take a look and then we'll discuss it. 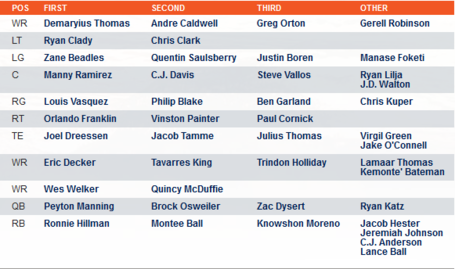 - No real surprises for those who have been keeping up with camp, though a few might be surprised to see Dreessen still the starting tight end but it matches up with what coaches, and Peyton, have been saying.
- A pleasant surprise for many will be Lance Ball being the 7th running back, last spot.
- Phillip Blake was drafted as a center and practiced as one for his entire NFL career till this year where they seem to not trust him, moving him to guard.
- Knowshon Moreno being the 3rd running back likely means a role similar to 2012, a situational player who is likely the backup starter should Ronnie Hillman or Montee Ball get hurt. 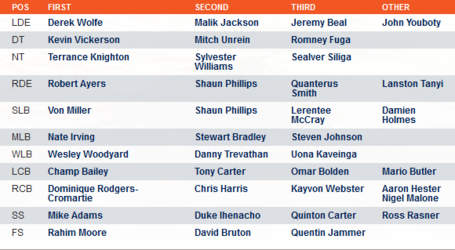 - Duke Ihenacho and David Bruton being the backup safeties makes sense, especially until a pre-season game Fox will rely on veteran Mike Adams, but he could lose his job once games actually start.
- Speaking of the backup safeties, it's interesting to note Bruton is the free safety and Ihenacho is the strong safety, I'm happy with this since it plays to their skill sets better.
- Shaun Phillips is listed as both the backup defense end and sam linebacker, makes sense, especially until Von's suspension is either removed or served.
- Most defensive starters have been entrenched from the start of camp, only the safety battle will likely see their starter change.

- No surprises here, outside of some good news for weapon QUincy McDuffie who was listed as the backup slot WR and is now the backup kick returner.

Now we know it's easy to say, "Oh this is just the 1st depth chart, it's meaningless." I used to be that way until MHR's own Topher Doll gave me an interesting fact: in 2012 there was only one starter that earned his spot between the first depth chart and starting season depth chart. In 2011 only two starters earned their starting duties in that same period.

So while it's easy to write it off, history shows the starters on this chart are likely the starters come the regular season. The big question will be: who fights it out for the final roster spots?

So what are your thoughts?