The Denver Broncos released their first depth chart of 2013 on Sunday in preparation for their preseason football debut Thursday in San Francisco. I expected to see the lineups I had talked about through two weeks now reflected in this first edition of Denver's depth chart.

There are a handful of positions on the depth chart that simply do not reflect the players' statuses as they stand through nine practices of training camp. The most egregious inconsistency is the starting status of Mike Adams, who has seldom seen time with the one's in camp. Sure, he has been lined up there from time to time, but at the start of camp, the Broncos were giving David Bruton every opportunity to win the starting job. About a week in, that opportunity was given to Duke Ihenacho, who has been lining up with Rahim Moore as a starter for several days now.

Similarly, Julius Thomas has been playing ahead of Jacob Tamme throughout camp and even OTAs and minicamp. Yet Julius is listed behind Jacob on the depth chart. 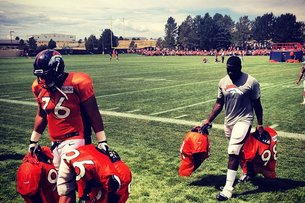 I was reminded of a quote by defensive coordinator Jack Del Rio, who was talking specifically about the competition at safety, but I think his message applies to all positions.

"That’s what we’re doing—we’re learning right now," Del Rio said last week. "We’re looking at a little bit of everybody, getting them in different spots. We’re evaluating. We’re exposing them to a lot. I like to use a lot of different combinations with our back end. We want to build that flexibility now, teach them different roles and let them compete. We’ll sort through that and determine which guys go first, and which guys come in in certain groups as we get going."

I was also reminded of something I have heard off-the-record: the Broncos are experimenting with younger players in the starting positions this camp. The depth chart at practice may not reflect the depth chart in games. Yesterday's unveiling certainly adds credence to that.

We know the performance of players in the preseason is not important when it comes to evaluating the way a team will play in the regular season. You cannot infer whether a team will be "good" based on preseason outcomes.

You can shuffle your cards, though, and figure out a pecking order within your roster.

So while we can get excited about the emergence of Duke Ihenacho and Julius Thomas and Malik Jackson in practice, those rises won't materialize until we get a chance to see these players perform against others not dressed in orange and blue.

Until we see these players in the preseason.