Peyton Manning, Wes Welker, Demaryius Thomas, and Eric Decker are on the cover of the August 12, 2013 edition of Sports Illustrated.

The theme of the issue? "Fantasy Meets Reality."

For the Denver Broncos, it's true. Two years ago, the only place you would find Peyton Manning, Wes Welker, Demaryius Thomas, and Eric Decker on the same team was in fantasy football.

But now it's reality, and the Denver Broncos are poised for a big year. Check out the Sports Illustrated cover photo below (thanks @ProLinkSports), and be sure to grab a copy of the issue when it hits newsstands soon. 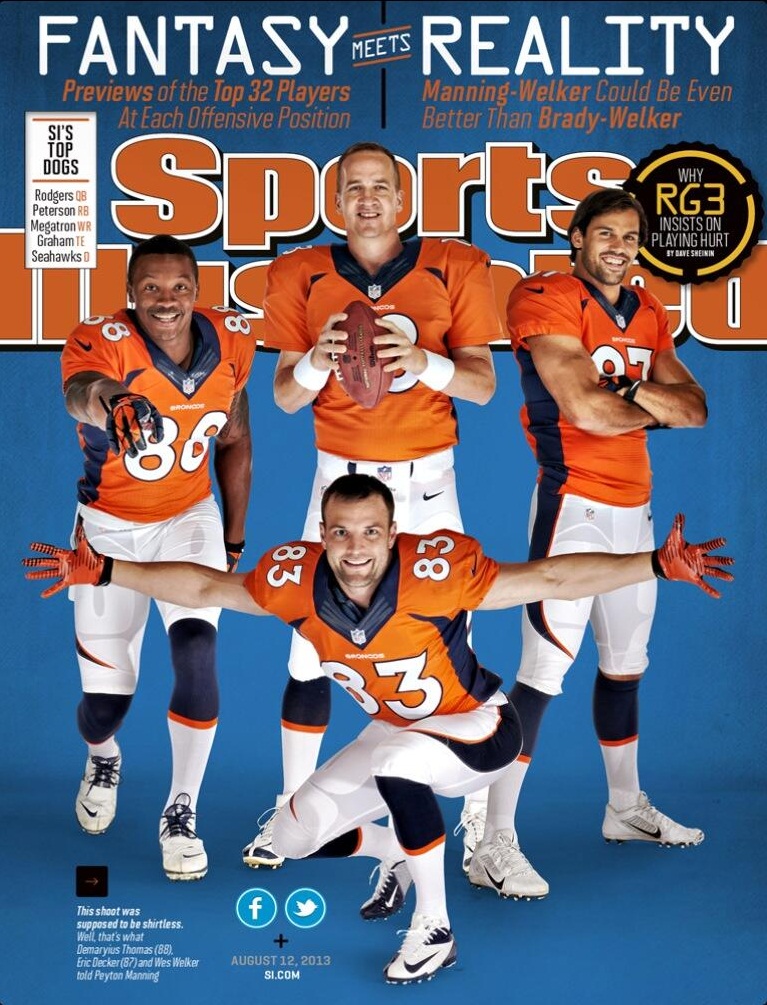 Having four players on the cover instead of just one offsets the Sports Illustrated Cover jinx, right? It's too much negative juju karma for the universe to handle, so the football gods offset the vile energy with an ultimately positive healthy season for these guys, right?

Although Wes Welker's pose is so ridiculous it may anger the football gods just enough to allow the negative juju karma.

Do you believe in the SI cover jinx?

UPDATE: Check out this excellent excerpt via DenverBroncos.com:

Last season he regularly posted articles in the lockers of Decker and Thomas. One piece was about Tony Gonzalez’s dedication and work ethic; Manning highlighted passages about how Gonzalez put in extra time after practice and worked on his weaknesses. The quarterback also taped two pieces of paper to the two receivers’ lockers almost every week. One contained the league leaders in dropped passes, with Thomas’s and Decker’s names highlighted. The other contained the leaders in quarterback completion percentage, with Manning’s name highlighted, invariably at the top.

Asked about it, Manning launches into a soliloquy of impressive passion, depth and, ultimately, borderline obsession.

“Dropped passes is an NFL statistic, believe it or not,” he says. “Now, there’s the drop and there’s the poor-throw category. If you’re Number 1 in [the latter], that means you have the least amount of poor throws. I’ve been searching for whoever the guy is who charts these: You can’t find him.” Manning furrows his large brow. “He’s an anonymous man who sits in his office and says he’s giving that a poor throw. We always argue over it—is it a drop or a poor throw? The rule is, if you get your hands on it, it’s a drop. Decker and Thomas like to fight with me on it. So I’m trying to find this guy. He’s a powerful guy; he can shake up a locker room in a heartbeat. I always argue, How does he know I wasn’t trying to throw it on the inside hip of the receiver? He’s probably smart to stay hidden and anonymous, because a lot of QBs want to…”

Here Manning trails off, leaving the last part to our imaginations. You can see how Manning’s receivers might appreciate playing with such an exacting man. You can also see how it might be enjoyable to give him a little grief, especially because he considers himself to be prank-immune. Which is why, on the morning of the photo shoot for the cover of this magazine, Decker and Welker pulled aside the photographer and the Broncos’ head of media relations, Patrick Smyth, and told them their plan. Then, when Manning arrived for the shoot, the receivers told him to get changed. Manning didn’t understand. “Didn’t you hear?” Decker said. “We’re doing it shirtless.” The quarterback became quite flustered, according to Welker: “He was hedging, like, Maybe a few years ago, but not now. And then he was asking Patrick Smyth about it, and I’m thinking, C’mon, don’t back out on me now!” Welker laughs. “Finally [Manning] said, ‘No way, I’m just not going to do it. You guys take the photo without me.’ It was hilarious.” Asked about it, Manning goes into deadpan denial mode. “I don’t know about that,” he says. “You got any more questions about Wes?”