Broncos at 49ers: Five Questions with the Enemy

Questions answered by the San Francisco 49ers experts over at Niners Nation.

Share All sharing options for: Broncos at 49ers: Five Questions with the Enemy

1. How has Colin Kaepernick looked in training camp, now that he's "the man"?

From the sounds of it, better than could have been expected. Teammates comment on how focused he is, not just on studying and his workouts, but on attention to detail, fully understanding and making sure everyone get's all the intricacies of the play. He's also been helping to design plays with the offensive staff, who are said to trust his input into the matter due to his full command of the offense.

Kaepernick's also been helping to design plays with the offensive staff, who are said to trust his input into the matter due to his full command of the offense.

Anquan Boldin commented yesterday that he and Kaepernick have communication after every play, in order to make sure they're seeing the same things and/or understanding the other's perspective. He also added that if anyone on the outside had a chance to play with Kaepernick they'd see "just how good he really is." Kaepernick noted that chemistry with his receivers is paramount to anything, saying that there isn't a play you can design that will work if guys aren't on the same page. It seems that he's doing everything he can to ensure that he has that chemistry with his guys.

While he's been seen doing TV ads and various marketing this off-season, he's been nothing but business when it comes to football. The old "first one in the building" adage applies here. His vehicle is in the best parking spot every day because he's at the facility first.

Reports from camp have said that he's improved his touch and accuracy at all levels, short, intermediate, and deep. He's even taking something off his passes, when needed, instead of rifling them all, which has been known to dislocate fingers (Moss in 2012) and potentially break them (Patton?).

2. How many snaps do you expect the 49ers starting offense and defense will play in this first preseason game?

The offensive line will play several series in order to give the backup skill-players a chance to work with good protection and run blocking.

I'm going to say that Kaepernick will maybe get one series, unless something like a turnover happens on the first few plays, then possibly two series. Frank Gore likely won't play at all until the third game, and then maybe three or four series, I'd guess. The offensive line will play several series in order to give the backup skill-players a chance to work with good protection and run blocking. I don't expect Boldin to play much beyond a series or two, but expect to see plenty of the other WRs on the field throughout the game with a fierce battle for WR2, WR3, and roster spots in general up for grabs.

Patrick Willis will not play due to a hand fracture. He will be replaced by Michael Wilhoite. Justin Smith is not expected to play due to an injured finger. Demarcus Dobbs will start in his place. The 49ers drafted Eric Reid as a safety of the future, but for this first game, free agent addition Craig Dahl will get the start.

3. What position battle has heated up over camp that you're excited to watch in preseason?

Boldin has instantly become the guy who will get the most catches, including the bailout throws, third down conversions, etc.

As mentioned above, definitely wide receiver, but also cornerback. At WR you have Michael Crabtree out until late in the season, if at all. Boldin has instantly become the guy who will get the most catches, including the bailout throws, third down conversions, etc. Behind him, though, are a bevvy of young and relatively unproven guys. Then you add a guy like Austin Collie into the mix, start thinking about investment made into the youngsters (recent draft picks, etc)...and it's anybody's guess who will emerge.

At CB, while the injury to Chris Culliver made things even more complicated, there already was a battle going on for the top 3-4 spots anyway. Carlos Rogers didn't have his best year in 2012, so it seemed his spot was up for grabs as a starter. Culliver and Nnamdi Asomugah were the primary candidates to overtake Rogers, but then the injury to Cully happened.

Nnamdi has had an up-and-down training camp, if you listen to beat writers and coaches talk about him. There were plenty of good plays he made, but then Defensive Coordinator Vic Fangio seemed to quiet that all down by saying that there have been bad days, the staff wonders if he's lost a step or not, and that he's still got to prove himself. Granted this could also just be motivational talk to keep a guy who used to be the premier player at the position sufficiently motivated. Fangio doesn't hand out much praise, anyway.

So you figure that Tarell Brown, Rogers, and Asomugah would be the top three guys by default, right? Not so fast, as fourth-year player Tramaine Brock is having a strong camp himself. Brock was the dime corner in 2012 and saw the field a lot there as well as special teams, where he really excels.
So I guess you could say it's still up in the air at CB...

4. What injury concerns do the 49ers carry heading into this game?

Broncos at 49ers: Where to Watch 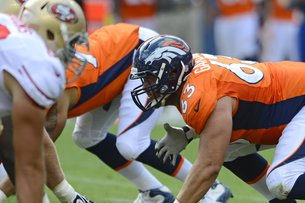 Patrick Willis will not play after having surgery on his broken hand. Some other guys have nicks and bruises and haven't been practicing, or have donned the non-contact jersey. Jonathan Goodwin is a guy who may not play at center, as Daniel Kilgore has been getting a lot of reps there while the veteran sat out of practice.

Rookie WR Quinton Patton also won't play with a reported broken finger that hasn't kept him out of practice, but he's not allowed to catch the ball...it's an interesting thing. He's still taking his reps, but he bats the ball down with his good hand if the ball ever comes his way, per the coaches...though the QBs are not supposed to throw to him. He's made a few accidental one-handed catches when the ball was mistakenly thrown to him...

Mario Manningham, Tank Carradine, Marcus Lattimore, and a few others are on the PUP/NFI lists and certainly won't play, either. Justin Smith supposedly sat out practice with a finger injury...not something you'd expect to keep him out of a real game, but this is preseason, so I'm not optimistic that he plays. Some of the WRs have had hamstrings and whatnot, but they have mostly all returned to practice the last week.

5. Do you buy into the hype that this could be a Super Bowl preview, 49ers vs. Broncos?

Sure, these teams could meet in the Super Bowl, but this ain't that game...

On paper there's no reason to think these two teams couldn't meet in the Super Bowl. I can see the storylines now: Old guard at QB faces new breed at the position, The team that courted Manning now faces him on the biggest stage, etc. Oh yeah, and Perrish Cox played in Denver, I'm sure that will be a huge deal (joke).
Sure, these teams could meet in the Super Bowl, but this ain't that game, hell, it's not even the regular season. Moving on.

Big thanks again to Niners Nation for taking the time to answer these questions! Check back with them for our answers to their questions later today.