After every Broncos win, the MHR Staff gets together to give out Game Balls! Here are who the staffers felt deserved praise following Denver's 10-6 win over the 49ers in preseason week one action.

This guy was all over the place. If I could think of one player who absolutely came from nowhere to shock everyone it would be this Nacho dude. In one half of play he notched seven tackles, a force fumble and a pass defense. I'll take that for an entire game easily, but in a half? I must see more.
- Tim Lynch

Thomas did everything the Broncos asked him to do and he did it well. He was asked to play the role of the H-back coming out of the backfield as a lead blocker and he successfully sealed off the backside defender more than once. He proved to be a tough matchup for the Niners moving the chains on several occasions with tough catches on the sideline or down the middle. I am confident in saying the Broncos would be perfectly fine with Thomas as a starting TE (if the injuries to Tamme and Dreessen linger) SO LONG as he continues his progress. He may not have had a ton of catches, but he caught my attention with his superb blocking.
- Bronco Mike 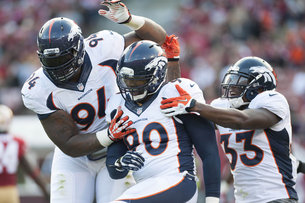 Big Brock didn't have a lot of help out there - his offensive line was a sieve for the most part, and it wasn't until the third quarter that the running game really got going. There the 6-foot-8 quarterback stood, the pocket crashing around him, with little to no time to throw.

Somehow, Osweiler completed his firs six passes amid the chaos, finishing the night with a solid 13 of 18 for 105 yards, playing 67% of Denver's offensive snaps. Was he fantastic? No. But for his first preseason action in his second year, I'll take solid, and careful with the football, any day of the week.
- Monty

On a night where no Broncos runners really did much of anything, the un-drafted rookie really stood out. He showed good vision, power, cut back ability, and just showed the fight you like to see a guy show while fighting for a roster spot. He was going against lesser talent, but it's good to see him perform well against that. Excited to see if he continues playing like this. Could make it interesting come final cuts.
- Scotty Payne

Moore seems to have "exorcised the demons" so to speak. He was never out of position, never out of control, and he was always right where he had to be in order to make plays (if Nacho didn't hog up all of them to begin with). Lets not forget that Ihenacho created a fumble, but it was Moore who scooped it up. Our two young safeties have me all gitty inside. The future is bright with Moore and Nacho playing together!
- Big Pete

Even casual fans were observing that Colin Kaepernick and the starting San Francisco 49ers defense was picking on Stewart Bradley, who started at middle linebacker for whatever reason. Then Colt McCoy came in and he too picked on Bradley. Then Nate Irving came in at strong side linebacker and boom, causes a fumble and the Denver Broncos score their first and only touchdown via Shaun Phillips scooping up the ball and running into the end zone. Irving capped off his first game atop the depth chart at middle linebacker with four tackles, a sack and a forced fumble. Not bad for a guy who can cover better than Bradley, missed practice time for personal reasons and seems to have been punished for whatever reason.
- Ian Henson

The rookie third round pick debuted in a big way Thursday night, intercepting Steve Tolzien in the third quarter for Denver's fourth and final takeaway of the night. "It was just me doing what I was supposed to do," Webster told me in a one-on-one interview that will drop on MHR Saturday. "The receiver went in motion, I backed up a little bit. He went upfield vertical, so I kind of sat on it. When he broke down, you know, I saw the ball released, then I just dove and caught it." A terrific catch, but an even smarter play.
- Monty

Who do you got?

Who gets your Game Ball? Let us know in the poll and in the comments!