"Christian's still there---we gotta lay it on his ass this time!"

Those are the words of all time great Safety Steve Atwater right before he laid out the "Nigerian Nightmare" in what is in my opinion the greatest hit in Broncos History.

"In the Kansas City Game, I was standing maybe one man away when he made a big hit on Okoye.  The sound of that hit fires you up....and all of a sudden it was like POW!!!-and the running back went backwards. I was lookin' around to see who the heck made that hit, I should have known."  --Simon Fletcher

"It's the first time that I've probably ever seen a 260lb back run into a free safety and go flat on his back, I mean it was exciting." --John Elway

"That one hit made Steve Atwater's career and diminished Christian Okoye's reputation as one of the great power running backs in the game." --Adam Schefter

Steve Atwater is more than just a one hit wonder.  The "Smiling Assassin" may have built his reputation on the lore of his big hits, but his play as a Free Safety should be required film study for all young aspiring football players.  I remember Steve dancing in and out of the box--doing his best to not tip the quarterback on the coverage.  I remember him coming up and stuffing a ball carrier at the line of scrimmage when the line and backers were all accounted for.  I remember him flying around the play and seemingly being in the right position everytime to make a tackle, big hit, or scoop up an interception or fumble.

He spent his collegiate days as a Razorback at the University of Arkansas where he was converted from quarterback to safety.  A two-time All-American, Steve set a school record with 14 interceptions--a mark that stands to this day.  The Broncos drafted the ball-hawking prospect 20th overall in the 1989 NFL draft and never looked back.  Early on in his career, he was used by Wade Phillips more as a box safety to help in run support which is why he was a perennial leader in tackles logging 129, 173, 150, 151, and 141 respectively during his first 5 NFL seasons.

His rookie year, Atwater finished 2nd to Derrick Thomas in the rookie of the year vote, but parlayed that impressive debut into 7 straight pro-bowl appearances (1990-1996) as well as the highest honor of All-Pro (1991-1992).  Hard-hitting aside, this buckin' Bronco was extremely durable missing only five games in ten years in orange and blue.  Throughout the duration of his 11 year career, Steve managed to intercept at least one pass every year.  When it was all said and done, Steve Atwater finished his illustrious and HOF worthy career with 24 interceptions, 6 forced fumbles, 8 fumble recoveries, 5 sacks, and 1074 tackles.

When pondering a player's HOF worthiness, one can look at numbers and impact.  Steve Atwater set the gold standard for Safety play for years to come.  He laid the groundwork for such impressive players like Troy Polamalu and should absolute be enshrined in Canton one day.

One of my lasting impressions of him besides a smile that could light up a room, was his big hit in Super Bowl XXXII.  Late in the game with the Packers making their last push to tie the game, Antonio Freeman streaked down the seam.  Atwater charged, put his head down, and hit his teammate who had been covering Freeman head on with such force that both players were knocked out cold.  Earlier in the game, he showed his versatility by blitzing the B gap to Brett Favre's blindside, causing a turnover and putting the Broncos in prime position to score some points.

As is usual, I wish I had been a little older when Steve was playing so I could remember more about his career.  One thing is for sure however, The Smiling Assassin will forever hold a place in the hearts of all Broncos fans as truly one of the greatest of all time!

Steve Atwater said his greatest accomplishment in life was "raising my children and staying married to my wife for 21 years (and counting)."

Original Artwork by Don Medina, check out more of his incredible original paintings and drawings here! 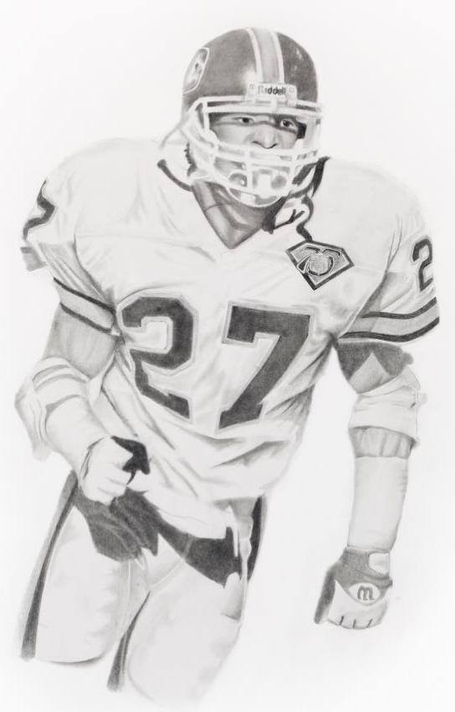