The AFC West will not go quietly into the night - well, except the Chargers

Lets take a look at how our AFC West rivals did this week in our Week One AFC West Watch.

Share All sharing options for: The AFC West will not go quietly into the night - well, except the Chargers

In the third quarter Monday night, with the Chargers sitting pretty with a 28-7 lead over the Texans, it looked like the AFC West was on the verge of something remarkable: a four-team cover across all four games.

If the #Chargers finish this game with a win, all 4 AFC West teams will have covered the spread in Week One.

Naturally, Philip Rivers did what Philip Rivers does - he collapsed in epic fashion in the second half. The loss lent a familiar touch as the NFL's Week One's swan song, but the three-point loss still kept the statistic true. The Chargers lost, but the Chargers covered the four-point spread.

What does that mean? All four AFC West teams were underestimated heading into Week One.

So while the Chargers will always go quietly into the night, the rest of the division is making noise. The AFC West appears poised to exceed 2013 preseason expectations. Let's take a look around the AFC West after Week One.

Yes, it was against the Jacksonville Jaguars. But putting a beatdown on an NFL team is never an easy task. Never. You have to recognize Kansas City's 28-2 drubbing of Jacksonville for what it was - a thoroughly dominating effort from one 2012 bottom-dweller to another. The Chiefs went up 21-2 and never relented, bolstered by three sacks from Justin Houston and a pick-six by Tamba Hali. 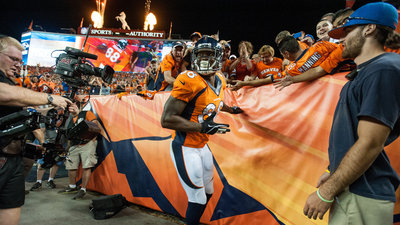 The Raiders decided to run with Terrelle Pryor in Week One, and Pryor decided to run the team into relevance. In his first start, Pryor broke Oakland's franchise QB rushing record, carrying the ball 13 times for a whopping 112 yards. The Colts were able to take advantage of a few mistakes by the Raiders however (including two Pryor interceptions) to edge out Oakland by four points. They were 10.5-point favorites.

The Chargers have felt this Monday Night Football sting before - against the Denver Broncos in 2012, when they blew a 24-0 halftime lead to lose 35-24 just under a year ago. I thought the Chargers would be different, and better, under new head coach Mike McCoy. Perhaps they will be, but Week One was a discouraging start, and proof that it can take more than a new voice at head coach to prevent that quiet walk into the night.