Peyton Manning and Eli Manning square off for the third time in their NFL careers as the Denver Broncos (1-0) and New York Giants (0-1) face off Saturday afternoon on CBS!

The elder Manning has won the previous two matchups, both as a member of the Indianapolis Colts. Now that Peyton is in orange and blue, it puts a fresh spin on one of the nation's favorite rivalries - a sibling one! 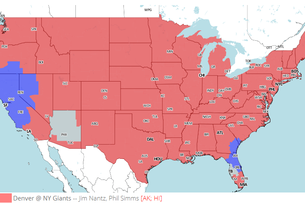 If you're in the red, you will get the Broncos game (click for more).

The game will be the nation's largest Week 2 broadcast on CBS with Phil Simms and Jim Nantz calling the game. In Denver, check KCNC-TV. On DirecTV, the game will air on Channel 715. For all other areas, refer to the TV broadcast map to the right.