Broncos vs. Giants: Five Questions with the Enemy

Questions answered by the New York Giants experts over at Big Blue View.

Share All sharing options for: Broncos vs. Giants: Five Questions with the Enemy

1. The Giants have had some turmoil at the running back position, what is there to make of the Brandon Jacobs signing?

That the Giants knew they desperately needed a veteran presence to help David Wilson, and they didn't want to bring in a guy who would need 3 weeks to learn the offense -- like Willis McGahee. The Jacobs' signing is popular with the fan base because of his past success with the Giants, but I have no idea if the guy has anything left to give on the field. 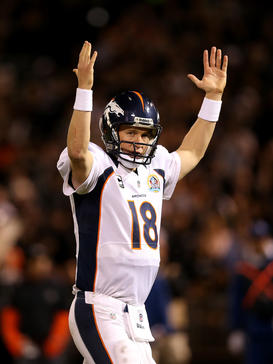 2. What part of this Giant's team worries you the most?

Entering training camp the automatic answer to that question was defense, since the Giants were 31st in the NFL in yardage allowed last season. All through the preseason and Week 1, however, the defense has been fine. It has been the offense that has been a mess, always seemingly for a different reason.

Running back has to be the big concern right now. The Giants had six turnovers, five on offense and one on a punt that hit a blocker, Sunday. I think all five of those turnovers can be tied, at least in part, to running back mistakes. Fumbles, bad routes, missed blocking assignments. The position has been a mess, and Da'Rel Scott left Wednesday's practice with a knee injury, possibly making things even more of a problem.

3. If you could take one player off the Broncos' roster and put him in a Giant's uniform on Sunday who would it be? Why?

Suspended right now or not, the obvious answer is Von Miller.

This will stir up Giants' fans, a segment of whom are so starved for a dominant linebacker we have taken to calling them the 'Beezer Brigade' and we've had t-shirts made for them, but the Giants haven't had a linebacker anywhere close to what Miller is since Jessie Armstead, and his last year with the Giants was 2001. Can we have him? Pretty please?

4. If you could be a GM for the day, what changes would you make to this Giants team?

I don't know. Maybe I'd find a hypnotist, or a witch who could brew up a magic non-fumbling potion for David Wilson. Or teleport back in time to the 2011 draft and find a way to get the Tampa Bay Buccaneers to skip drafting Doug Martin, which they did one pick ahead of the Giants, who took Wilson as a consolation prize, and leave him so I could do that.

5. Will Hakeem Nicks be a Giant next year?

That is a tough question to answer. If he continues to play at the level he played at Sunday, when he was a monster, I think the Giants have to try to find a way to pay him. But if Rueben Randle emerges as a guy who can handle that position then it just doesn't make sense to pay Nicks $12 million a year, as good as he is. So, I just don't know. Gut feeling with a gun to my head? I think he bolts and goes home to play for the Carolina Panthers.

Big thanks again to Big Blue View for taking the time to answer these questions!